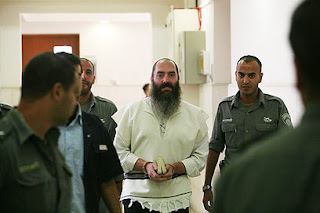 Sources close to 'Jewish terrorist' say Prison Service trying to conceal his deteriorating mental state before court decides if he is fit to stand trial. In one incident, they say, he injured himself while 'fighting demons' in his cell

"Jewish terrorist" Yaakov (Jack) Teitel, who was charged with murdering two Arabs, sustained light injuries to his hand at the Ayalon Prison when he imagined he was fighting demons and threw a pot at a mirror in his cell, Ynet learned overnight Sunday.

Teitel's associates are accusing the Prison Service of trying to conceal his mental deterioration and preventing him of proper care. According to them, Teitel lost his sanity a long time ago and has even been deemed unfit to stand trial by prison psychiatrists.

A district court is expected to address the matter this month.

Teitel's acquaintances said his mental state has deteriorated over the past few weeks. During this time, they said, he has been "fighting demons" he believes are attacking him, jumps around and hides inside his cell.

In one incident Teitel "fought a demon" he claimed was hiding in his mirror. He threw a pot at the mirror and lightly injured his hand. In another incident Teitel was found unraveling the velvet curtain covering the Ark of the prison's synagogue, claiming demons were hovering around it.

One of Teitel's associates said he should be committed to a mental hospital, "but the Shin Bet is preventing it because in a month's time there is a hearing on his mental state and the prosecution claims he is fit to stand trial. If he is committed the State would essentially be admitting its mistake, so for the time being he is suffering and other inmates are suffering from his behavior."

In November 2009 Teitel was indicted for a string of offenses he had allegedly committed over the course of more than a decade, including the murder of two Palestinians, planting an explosives device outside the home of left-wing professor Ze'ev Sternhell and placing a bomb at the home of Messianic Jews in Ariel.

Attorney Adi Keidar, who is representing Teitel, said, "The Prison Service is doing everything it can to prevent Teitel from receiving the necessary psychological treatment. His condition has recently deteriorated, but instead of sending him to a psychiatric evaluation at a hospital, he was returned to the ward.

"It seems as though the Prison Service is trying to hide the fact that he is deteriorating and that he has not received proper medical treatment. Another prisoner would have been committed to a mental hospital a long time ago," said the attorney.

The Israel Prison Service said Teitel was being treated by a psychiatrist from the Health Ministry.
Posted by joe levin at 9:20 PM