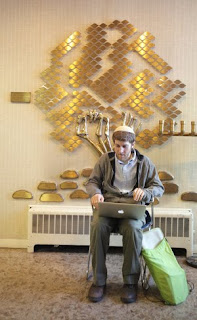 PORTLAND - It's not unusual to see college students gathering on a Friday night to relax after a long week of study.

But a group of collegians who met up in Portland on Friday evening came together -- from several campuses around northern New England -- to share a traditional Jewish observance of the Sabbath.

The gathering, the third annual College Shabbaton for Brandeis and Maine College Students, was held at Congregation Shaarey Tphiloh, a 107-year-old Orthodox Jewish congregation on Noyes Street, near the University of Southern Maine.

One goal of the event is to give college students who grew up with traditional Jewish observances a chance to reconnect while they're away from home, said Rabbi Akiva Herzfeld.

Another, said Herzfeld, is to help bring youth and energy to Orthodox Judaism in Maine, at a time when many Jews have shifted away from Orthodox practices.

For the college students who came Friday afternoon, including many who will stay until the Sabbath ends today, one big draw was the chance to be with young people who share their religious beliefs.

"It's nice to be able to interact with other young Jewish adults who share the same tradition," said Shoshana Cohn, 23, a senior at Bowdoin College in Brunswick, who grew up in West Hartford, Conn. "An Orthodox (Sabbath) allows us to do the traditional rituals we don't get to do on a weekly basis at college."

Rabbi Herzfeld, 32, said that at many Maine colleges there are Hillel Houses -- Jewish student organizations -- but often there is no real traditional Jewish celebration of the Sabbath, when work and travel cease.

"We get calls from people saying, 'Can you reach out to my son, or reach out to my daughter, while they're away from home?'" said Herzfeld. "We want to let college students come together here and know they don't have to feel isolated."

Many of the students came from Brandeis University in Waltham, Mass. They said they were happy to bring the energy of their Jewish community to Portland.

"We're a very spirited group, very into our religion and practices," said Jacob Chatinover, 22, who came to Portland with the Brandeis group for the third straight year.

Most of the students arrived by about 4 p.m., in time for the afternoon prayers just before sunset. Many planned to spend the night in the synagogue, so as not to violate rules about traveling in a vehicle on the Sabbath. Cell phones, laptops and other electronic gadgets were turned off.

Later in the evening, the group shared a meal in the synagogue's social hall.

Michael Warmflash, 25, a first-year student at the University of Maine School of Law in Portland, said that when he came to Maine from Stamford, Conn., he was happy to find an Orthodox Jewish synagogue.

He's happy that the congregation of Shaarey Tphiloh is taking steps to cultivate its future generation, with events like the shabbaton.

"It's important to always be reaching out to young people," he said, "so bringing so many college students here is a great way to promote growth, to look for the next generation."
Posted by joe levin at 2:41 PM