Todd Palin, husband of Sarah Palin, is not involved in a prostitution ring with Shailey Tripp: cops 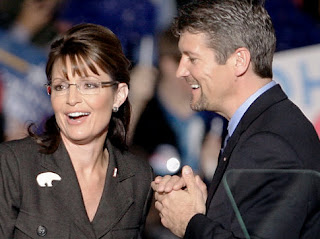 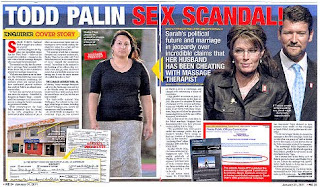 Looks like the First Dude is off the hook.

The Anchorage Police Department blasted the National Enquirer’s recent report that Todd Palin is embroiled in a sex scandal involving an extramarital affair with a massage therapist who belonged to a prostitution ring.

"It was just guilt by innuendo, nothing else," Lt. Dave Parker told the Daily News on Wednesday. "There’s not one scintilla of evidence that Todd Palin had anything to do with this."

The Enquirer claimed 36-year-old Shailey Tripp was arrested for maintaining a house of prostitution in March and that cops had confiscated physical evidence that could tie ex-Gov. Sarah Palin's husband to the alleged affair.

The tabloid did not disclose when the alleged rendezvous took place or what evidence was seized by police.

Parker confirmed that Anchorage police arrested Tripp for running an illegitimate massage parlor, and evidence -- like record books -- were taken by cops as part of the investigation.

But none of the evidence examined by police showed any connection to Palin, Parker maintained, adding that Palin was never even on their radar.

Shailey Tripp is shown on the left, according to the tabloid. (National Enquirer)

The Palins, who have previously been dogged by cheating allegations in 2008 and 2009, have vehemently denied former claims, though they have not commented on the Enquirer story.

The Enquirer claimed in its Jan. 31 issue that the Palin story began after several media outlets received an anonymous e-mail from thepalinmorals@hotmail.com, alleging Tripp had an affair with Palin.

The APD said the tabloid never contacted the public affairs department, so their reported "call to the Anchorage Police Department" could not have been returned.

The tabloid has since updated its web story with a press release from the police department.

In explaining the bombshell allegations, Parker said some in Anchorage were just "rabidly anti-Palin," adding "they will do anything to destroy the platform Sarah Palin is standing on."
Posted by joe levin at 3:09 PM