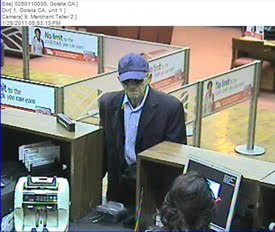 The Geezer Bandit has apparently struck again, this time in Santa Barbara County, for his 13th bank robbery in California, the FBI announced Saturday.

Given his nickname due to his apparently advanced age, the robber hit a Bank of America branch in Goleta in Santa Barbara County on Friday afternoon, threatening tellers with a revolver.

His appearance -- 60 to 70 years old, about 6 feet tall, dressed in a blazer, dark pants and a baseball cap -- and demeanor matched the other robberies.

The same person is suspected of 10 bank robberies in San Diego County, one in Kern County and one in Riverside County, starting in August 2009.

In recent robberies, authorities have suggested that the robber may be wearing an "old-man" theatrical mask.

The FBI and several banks are offering a reward of $20,000 for information leading to an arrest and conviction.
Posted by joe levin at 7:37 AM