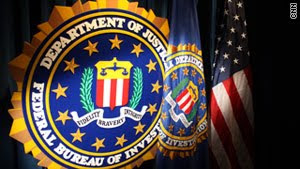 An FBI employee shared confidential information with his girlfriend, who was a news reporter, then later threatened to release a sex tape the two had made.

A supervisor watched pornographic videos in his office during work hours while "satisfying himself."

And an employee in a "leadership position" misused a government database to check on two friends who were exotic dancers and allowed them into an FBI office after hours.

These are among confidential summaries of FBI disciplinary reports obtained by CNN, which describe misconduct by agency supervisors, agents and other employees over the last three years.

The reports, compiled by the FBI's Office of Professional Responsibility, are e-mailed quarterly to FBI employees, but are not released to the public.

And despite the bureau's very strict screening procedure for all prospective employees, the FBI confirms that about 325 to 350 employees a year receive some kind of discipline, ranging from a reprimand to suspension.

About 30 employees each year are fired.

"We do have a no-tolerance policy," FBI Assistant Director Candice Will told CNN. "We don't tolerate our employees engaging in misconduct. We expect them to behave pursuant to the standards of conduct imposed on all FBI employees."

However, she said, "It doesn't mean that we fire everybody. You know, our employees are human, as we all are. We all make mistakes. So, our discipline is intended to reflect that.

"We understand that employees can make mistakes, will make mistakes. When appropriate, we will decide to remove an employee. When we believe that an employee can be rehabilitated and should be given a second chance, we do that."

Will, who oversees the bureau's Office of Professional Responsibility, said most of the FBI's 34,300 employees, which include 13,700 agents, follow the rules.

However, the internal summaries show that even with serious misconduct, employees can keep their job (names and locations of the employees are not listed in the reports):

-- An employee had "a sexual relationship with a source" over seven months. The punishment was a 40-day suspension.

-- The supervisor who viewed "pornographic movies in the office while sexually satisfying himself" during work hours received a 35-day suspension.

-- The employee in a "leadership position" who misused a "government database to conduct name checks on two friends who were foreign nationals employed as exotic dancers" and "brought the two friends into FBI space after-hours without proper authorization" received a 23-day suspension. The same employee had been previously suspended for misusing a government database.

-- An employee who was drunk "exploited his FBI employment at a strip club," falsely claiming he was "conducting an official investigation." His punishment was a 30-day suspension.

-- And an employee conducted "unauthorized searches on FBI databases" for "information on public celebrities the employee thought were 'hot'" received a 30-day suspension.

Will said she could not discuss individual cases, and added: "I can't even confirm whether or not your information is accurate."

She said the bureau follows established guidelines for punishing employees.

The employee who made the sex tape with the reporter, for instance, resigned before being fired, according to the report.

That employee "misused administrative leave, misused his credentials to get into a night club, misused a government vehicle, provided law-enforcement-sensitive documents to his girlfriend, who was a news reporter, improperly stored secret documents in a hotel room, which were viewed by his girlfriend, and following their break-up, threatened his girlfriend with the release of a sex tape the two had made, which threats she referred to a U.S. attorney's office," the internal summary report said.

Another employee, who used a "video camera to record (a) co-worker changing in (the) women's bathroom," also resigned, according to the report. The employee "lied about his conduct to (a) co-worker and attempted to erase the video when asked to relinquish the camera upon being caught."

And an employee who harassed a "former boyfriend, his mother and his new girlfriend" with "repeated phone calls, text messages, e-mail" was fired, the report said.

"If you lie under oath, you are gone," Wills told CNN. "If you tell the truth --- it's sort of Watergate 101. It's not always the behavior itself that results in a seriously adverse finding. It can just be the cover-up."

Konrad Motyka, the president of the FBI Agents Association, said, "Specifically, demonstrable, incorrect conduct or criminal conduct is not acceptable and never should be. But...our rate of conduct is actually less than in a lot of places, and human beings, being what they are, with the size of the organization we have, occasionally there will be some issues that come up."

James Wedick, a former veteran FBI supervisor who owns a consulting firm, said the misconduct is an embarrassment to the bureau.

"We are horrified, we're embarrassed. It bothers every official. It bothers everyone who works for the bureau. But law enforcement, the FBI, is made up of men and women. Men and women do make mistakes, and unfortunately, sometimes the mistakes are little bit more egregious than others."

Email ThisBlogThis!Share to TwitterShare to FacebookShare to Pinterest
Labels: CNN