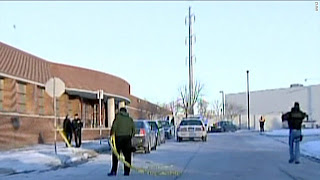 Four police officers were shot at a Detroit police precinct on Sunday afternoon but all are expected to survive, the city's police chief said Sunday.

The most seriously injured officer -- he was shot in the lower back -- emerged from surgery Sunday evening, Detroit Police Chief Ralph Godbee said.

A person who police identified as the shooter was shot dead, Godbee said at a Sunday evening press conference.

In addition to the officer shot in the back, who is a commander, Godbee said a female sergeant was shot in the chest but was protected by a bulletproof vest. Two male officers were grazed in the head but are conscious, alert and talking, he said.

"We are very relieved that it appears that all our officers are going to be OK," Godbee said.

He updated earlier reports that three officers had been shot. He said the identities of the wounded officers are being withheld until their families are notified.

Police have identified the shooter, Godbee said, but are withholding the person's name as they conduct an investigation of the incident.

The officers were transported to Detroit's Sinai-Grace Hospital, according to state police Sgt. Keyonn Whitfield.

The shooting occurred at the Detroit Police Department's sixth precinct station, according to Michigan State Police Sgt. Gerald Badgett. The station is on the city's west side.
Posted by joe levin at 8:52 PM