A Canada-wide warrant has been issued for Paul Craig Cobb, who is believed to have fled to the United States. 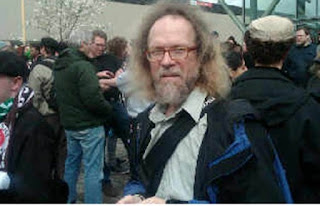 Craig Cobb, 59, wrote from his U.S. hideout that he preferred his followers decide on “doing something they haven’t yet done before” for the white supremacist cause — rather than offer him help.

He cited three far-right extremists as having carried out acts that he urged should be seen as templates for future acts of violence, according to Washington-based SITE Intelligence Group.

“History may turn,” Cobb wrote, if there were “just a few more” people such as Joe Stack, who in 2010 flew his Piper Dakota plane into a federal building in Austin, Texas, killing himself and an Internal Revenue Service manager, and injuring 13; James von Brunn, who perpetrated the U.S. Holocaust Memorial Museum shooting in Washington, D.C., in 2009, killing a security guard; and Joseph Paul Franklin, a serial killer motivated by a pathological hatred of African Americans and Jews.

Cobb is believed to be in Montana, where he readily admits his home is a “hole in the ground” as he discusses getting by on minimal handouts from friends.

“Money doesn’t motivate him at all; he only wants money to survive,” said Det. Const. Terry Wilson of the RCMP’s B.C. hate crime team.

The message, posted by an intermediary, appeared on the extremist Vanguard News Network Jan. 8, according to SITE.

Canadian authorities have accused Cobb of operating his own hate website from Vancouver for 10 months before his arrest at the Vancouver Public Library last June following a six-month Hate Crime Team investigation.

Massachusetts killer and rapist Keith Luke told police in January 2009 he “drew his inspiration” from the now-closed site, according to the local Enterprise newspaper. Luke, then 22, murdered two black immigrants and raped and shot another.

Among the site’s many channels were also user-submitted videos, some of which showed Russian neo-Nazis beheading and shooting Asian immigrants, and Russian skinheads punching and stomping of orthodox Jews and non-whites, according to the research group Southern Poverty Law Center.

Cobb fled to the United States after RCMP released him within 10 hours of his arrest because of a delay in the police agency’s ability to lay the federal hate-crime charge. Such charges require the provincial attorney general’s approval.

A warrant was issued for his re-arrest after police on Dec. 30 laid a charge of wilful promotion of hatred.

Missouri–born Cobb, who gained Canadian in addition to U.S. citizenship after living in Canada in the 1970s, created his site in 2005, when he lived in Estonia. He returned to Canada after the Estonian government deported him in August 2009.
Posted by joe levin at 10:58 AM