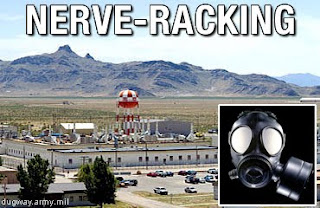 The Army gave the all-clear Thursday after loosing track overnight of a vial of lethal VX nerve agent at a Utah base.

An emergency lockdown went into effect around 6 p.m. Wednesday at the sprawling Dugway Proving Grounds when the vial turned up missing during a routine inventory check.

More than 1,000 employees were held at the base southwest of Salt Lake City as military officials launched a frantic search.

The missing vial was found on the base around 3 a.m.

A military spokesman said "all personnel are uninjured and safe. The public is safe as well."

The vial contained less than 1 milliliter, or roughly a quarter-teaspoon, of the VX, considered the deadliest agent in the military's arsenal.

Earlier in the day, military officials mysteriously said the shutdown went into effect amid a "serious concern."

Armed sentries blocked the entrances while Army officials refused to say what prompted the lockdown.

"No one is in immediate danger but these steps are required," Col. William King IV, the base commander, said at the time.

Dugway is used by the Army Reserves and the U.S. National Guard for training, and the base also serves as a bombing range.

The Army Test and Evaluation Command center also conducts training and tests of defenses against biological and chemical weapons attacks.
Posted by joe levin at 2:44 PM