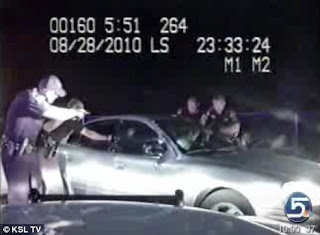 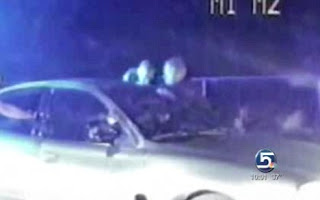 A video revealed today a Utah Highway Patrol trooper repeatedly punching a woman in the head during a traffic stop.

Darla Wright, 53, was pulled over in August last year by Sgt. Andrew Davenport and a team of other officers after a police chase.

The officers claim in the incident report that Wright was driving erratically and tried to avoid being pulled over.

During the chase, they finally managed to spin Wright's vehicle to a halt by hitting the back of her car and sandwiched it between two police cars.

Sgt. Davenport ran up to Wright's car shouting 'get out of the car' and asked her to roll down the window but she refused to let go of the steering wheel.

'The suspect was still trying to escape, she had the accelerator floored and engine revving in an attempt to push our vehicles out of the way', Sgt. Davenport wrote in the incident report.

It was then that the video shows him smashing the driver's side window and beginning to punch the woman, striking her repeately in the head and face.

Another officer is seen pointing a taser at the startled woman from the back window.

The shocking images were captured by the camera on the police vehicle dashboard last summer but only released by the Utah Department of Public Safety this week.
'She refused to comply with commands to give us her hands', Sgt. Davenport wrote in his police report.

'Due to my close proximity to the suspect and my experience with Taser failure at such close distances, I delivered three close hand strikes to her head in an attempt to gain compliance with our commands.

'I did this to distract and stun her and to stop her from trying to drive off and strike our vehicles or possibly run us over. The strikes worked and we were able to grab her hands', he added.

Wright told local news station KSL that she does not remember much of the incident apart from a 'black glove coming through and hitting me... just smack'.

She asked: 'What did they do? [Did they] knock me out to put me to sleep? What did they do?'
Wright was taken into custody on suspicion of DUI, reckless driving, eluding police, resisting arrest and assault on a police officer but all of her charges were dismissed earlier this month.
She was taken to hospital and required stitches and said she wants people to see the video and make up their own mind as to if the officer used excessive force.

Unidentified prescription medication were found in Wright's car according to KSL.
Utah police are currently investigating the matter, while Sgt. Davenport remains on paid administrative leave.

Bryan Hyer, spokesman for the Utah Department of Public Safety said that the investigations involve 'multiple layers of reviews'.