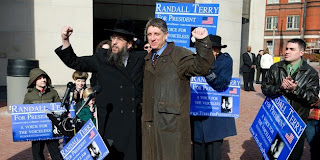 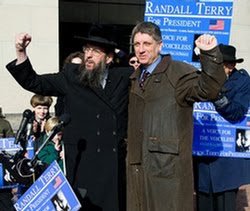 President Obama, members of Congress, and most of the country might be discussing how to bring more civility to the country's political debate, but at least one presidential candidate has other ideas.

At a press conference on Thursday to discuss a quixotic Democratic primary challenge to Obama, anti-abortion activist Randall Terry employed provocative racial rhetoric and suggested he wants to capitalize on "voter rage."

The president's efforts to beef up the country's social services has turned America into "Obama's plantation," said Terry, who held his event outside the U.S. Holocaust Memorial Museum.

“There are a lot of slave laborers, myself included, who would like their freedom back,” he said, describing the president as the object of "voter hatred."

Terry's challenge to Obama is a long shot, to say the least. Any primary challenge to Obama has seemed most likely to come from the president's sometimes discontented left, with speculation focusing on outspoken liberals such as former DNC Chairman Howard Dean or former Sen. Russell Feingold of Wisconsin.

Terry, on the other hand, is set to attack Obama from his extreme-right flank, and he doesn't plan to pull punches. That's particularly true over abortion. Terry routinely describes the procedure as the "slaughter" of babies.

It's a message he would like to take to the country's biggest sporting event: Terry said on Thursday that he will begin raising the millions of dollars necessary to run an ad during next year’s Super Bowl condemning the president’s record on abortion. He estimated the spot would cost $2.5 million, money he said he would raise through a combination of small and big donations.

Although his anti-abortion, anti-entitlement platform might seem more in line with the Republican Party, Terry said he’s not seeking the GOP nomination because he doesn’t want to waste time campaigning against candidates like Sarah Palin and Mike Huckabee.

“I want to focus on the bad man–Obama,” he said. “He’s the central figure of voter rage.”

Terry said he will try to put a scare into Obama by winning a large percentage of the vote in Iowa caucuses–above 40 percent–with a campaign that gets Republican and tea party voters to cross party lines and vote for him.
Posted by joe levin at 8:27 PM