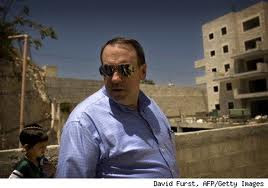 Unofficial Republican party presidential candidate and former Arkansas Governor Mike Huckabee, a solid supporter of Israel, is en route for his 15th visit. He has said he probably will wait until summer before announcing whether or not he will run for president in 2012.

"Headed to Israel with family and friends. Looking forward to my 15th trip there," Huckabee's tweet read on Saturday, as results show him topping the polls in West Virginia and North Carolina.

Huckabee often has said that if the Arabs in Judea, Samaria and Gaza want a state, they can choose from among several Arab nations and that Jews, who are indigenous to the area, should be able to build wherever they wish to in their country.

Huckabee’s visit this week will take him to the Knesset, as guest of MK Nissim Ze'ev wo will host a luncheon for him and where the Immigration and Absorption Committee will make a rare exception and host him at a meeting. He also will visit Jewish communities in united Jerusalem, Judea and Samaria, including the Barkan Industrial Center at the city of Ariel.

Dr. Joseph Prager, Dr. Paul Brody and Odeleya Jacobs, all known Zionist American figures who are active in promoting positive public relations between Israel and the United States, have already arrived to help arrange the details of his visit.

Huckabee will be accompanied by actor Jon Voight, who can be seen and heard in the following video backing Huckabee and condemning U.S. President Barack Obama for “raping” the nation of the United States.

In North Carolina, he leads with a nine-point advantage

Email ThisBlogThis!Share to TwitterShare to FacebookShare to Pinterest
Labels: IsraelNationalNews.com