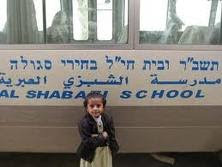 Yameen Ameran Al-Nahari, 8 years, disappeared while the Jewish community was practicing their religious rituals on the weekend.

Sources said that the kidnapping of the child targeted to pressure the Jewish community to forgive Abdul-Aziz Al-Abdi, who shot dead a Jewish fellow citizen, Mashaa Yehiya bin Yaeesh Al-Nahari, and accept his fine in which he will pay 5.5 million riyals.

Lately, a Yemeni court upheld a death sentence on a Muslim man after being accused of killing a Jewish citizen.
Posted by joe levin at 2:34 PM