The president of the National Union of Students, Aaron Porter, was surrounded by a 150-strong mob who broke away from a student fees protest in Manchester yesterday 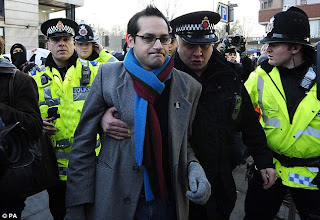 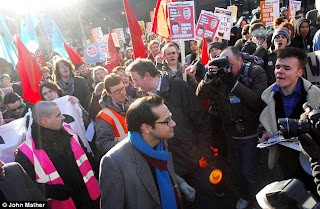 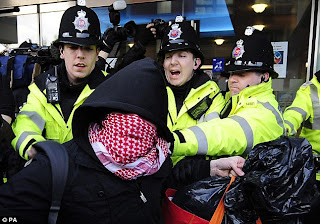 The president of the National Union of Students was yesterday rescued by police from angry protesters chanting anti-Jewish abuse and demanding his resignation.

Aaron Porter was surrounded by a 150-strong mob who broke away from a student fees protest in Manchester.

Mr Porter, 25, a Labour Party member, was due to speak at the rally but later cancelled.

The demonstration, attended by thousands of students, began peacefully but around 150 demonstrators broke off from the agreed route and headed towards the city centre, where they targeted Mr Porter.

Scuffles broke out after a number of protesters attempted to break through police lines into the University of Manchester Students’ Union building.

Mr Porter has been accused of failing to support those involved in the demonstrations at Millbank Tower in November and in the protest that led to the attack on the Prince of Wales in his car the following month.

The violence led to scores of arrests. One student was later jailed for throwing a fire extinguisher from the roof of the tower.

While strongly supporting peaceful protest Mr Porter was resolute in condemnation of violence, saying ‘this was not part of our plan’.

He has also been strongly criticised by students after saying that while he is ‘not happy’ about the new tuition fees, he will not be campaigning for their repeal, instead calling for them to be capped at £6,000 rather than £9,000.

The National Campaign Against Fees and Cuts has called for him to step down as NUS president, claiming he has ‘lost the confidence of the movement’.

A Leeds University student said: ‘He is completely unrepresentative of us. He condemned the protests in Millbank and on December 9 saying he condemned the violence. But it was caused by the police kettling.

‘He is not representing us because he is not trying to stop this Government. He should be arguing to stop the cuts. We went to confront him to tell him what we thought and he ran away with a police escort.’

Last night around 80 protesters were being contained in Deansgate near to the Hilton Hotel as the centre of Manchester returned to normal. Police said there were 14 arrests.

Meanwhile, in Central London 5,000 students and trade unionists demonstrated against fees and cuts. Around 300 protesters tried to storm Conservative Party headquarters at Millbank, scene of last year’s clashes, but were held back by lines of police.

One protester who broke through was tackled to the ground and held there for several minutes.
Posted by joe levin at 11:47 PM