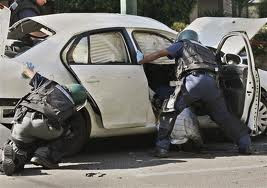 A police bomb squad was called out to Bnei Brak to neutralize an explosive device attached to a vehicle on Monday afternoon.

The incident unfolded on Rehov Bar Kochva, which was sealed off during the police operation.

Soon afterward, the device was neutralized.

"The device was removed from the scene and destroyed," a Tel Aviv police spokeswoman said.

She added that the vehicle, a Chrysler, belongs to a lawyer who is training at the Bar Mucha law office.

Police said it was too soon to say what the background to the attempted bomb attack is.
Posted by joe levin at 6:34 PM