Israeli Arab who spied for Hezbollah jailed for nine years 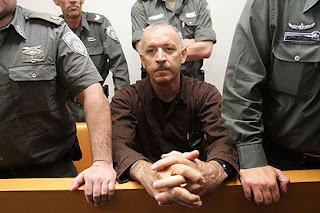 Ameer Makhoul was detained by the Shin Bet and police anti-terror units last May; struck plea bargain with prosecution.

The Haifa District Court on Sunday sentenced Israeli Arab activist Ameer Makhoul to nine years in prison and another year suspended sentence for charges of spying and contact with a foreign agent from the Lebanon-based Hezbollah militant organization.

Makhoul's lawyers struck a plea bargain with the prosecution in October 2010, in which they asked for a reduced sentence of seven years, while the prosecution asked for 10 years - the maximum sentence for the charges against him.

The verdict stated that Makhoul handed intelligence to a Hezbollah agent on Shin Bet installations in the Haifa region and on Mossad offices in the center of the country. He also attempted, the verdict said, to pass on information about a military base and sought details about the residence of Shin Bet chief Yuval Diskin.

Makhoul, director general of the charity Ittijah (Union of Arab Community-Based Associations), was detained by the Shin Bet security services and police anti-terror units on May 6, along with fellow Israeli Arab activist Omar Saeed.

Saeed struck a plea bargain in August, under which he will be charged with working for an illegal organization, a crime that carries a punishment of several months' jail-time.

Upon his arrest, Makhoul was kept from meeting with a lawyer or speaking with his family for nearly two weeks, during which he confessed to the accusations. His lawyers later claimed the confession was coerced. They were finally allowed access to Makhoul only after threatening to boycott a hearing.

Makhoul, a veteran activist well-known among Arab charities and NGOs, was a regular participant in conferences on discrimination in Israel and abroad and has been a virulent critic of government policy.
Posted by joe levin at 6:41 AM