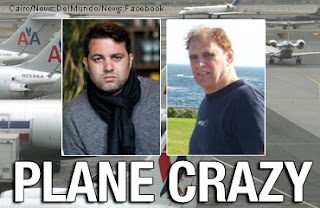 Two New Yorkers came to the rescue of a beleaguered flight attendant after he was attacked by a deranged man on a JFK-bound plane, sources said Friday.

One of them, 36-year-old Ramiro Silos, said the burly man was "screaming something about his sons."

The unruly passenger was identified by police as 63-year-old Michael Isabelle of Framingham, Mass.

Isabelle was taken by Port Authority police to the psych ward at Jamaica Hospital after the plane landed safely on Thursday. No charges have been filed against him.

Ed Martelle, a spokesman for American Airlines, confirmed they had "a disruptive passenger on board" Flight 256 out of Rio de Janeiro. He declined to give any other details.

The drama began around 5:45 a.m. Thursday, about an hour before the plane was due to land at Kennedy Airport, Silos said.

A Brazilian who has lived in New York for a dozen years and owns two restaurants in Tribeca, Silos said he had just eaten breakfast when he heard the burly man berating a flight attendant sources identified as Carlos Carrico.

"He looked like he was trying to get to the bathroom and got mad because the (beverage) cart was in the way," Silos said. "The guy was screaming at this Carrico and punched him and knocked over the cart."

Carrico tried to defend himself, Silos said, "but he couldn't handle the big guy by himself."

Silos said that's when he and his friend, whom he identified as fellow New Yorker Fernando Gil, sprang into action.

"He's an older man, but in the beginning we didn't know if he had a weapon," he said of Isabelle. "But me and my friend jumped and got the guy."

Silos said they slugged the struggling man several times before pinning him down. He said they bound his wrists behind him using plastic ties.

"I did ju jitsu in Brazil for nine years, so I can handle myself," Silos said. "But yes, we were worried because he was acting crazy. We didn't know what was going on."

Isabelle, who is married, claims to be a veteran on his Facebook page. He lists as his hobbies shooting guns, riding motorcycles, yoga and "helping to maintain the freedom of this country and bring the Constitution back into focus."
Posted by joe levin at 3:22 PM