Arrests like that of alleged street boss Andrew "Mush" Russo and associate Angelo Spata ( second from left) have left the Colombos in disarray. But unlike the old days, it's informants, not hits, that hurt the mob most 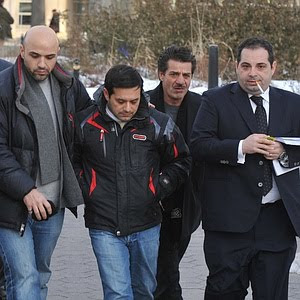 The Colombo crime family rats whose taped conversations led to last week’s massive federal bust of 127 gangsters will likely touch off a bloodbath in the family to avenge the betrayal.

“I think they’re going to kill people, because the guys running around making the tapes were made members of the family,” a high-ranking source close to the investigation told The Post.

“I’ve heard that people are looking to retaliate.”

The Colombo turncoats included two “well-positioned” made members — above the rank of soldier — and one associate, the source said.

Made men take an oath of omerta, or silence. They are expected to do anything for the family — including murder.

“I think people in the Colombo family are very much in shock over what happened,” the source said. “That Colombo leadership is a dangerous bunch — they’re reckless killers, and sometimes it doesn’t take much for them to decide someone has to go.”

The first targets of revenge would be the informants, and then guys who brought them into the family. The biggest-ever Mafia sweep hit the Colombos hardest, leaving around 40 made guys on the street, the source said.

Another law-enforcement source, an expert on the Colombo family, said the most important arrest was the de facto leader Andrew “Mush” Russo — which leaves the family rudderless.

“Nobody knows who will take over,” the source said. “There’s nobody left.” Russo, well-liked by the family, was convicted of jury tampering in 1999.

For fellow Colombo Anthony “Big Anthony” Russo, who is not related to Andrew Russo, violence was as easy as spreading butter on bread. In one of the taped conversations by a mob rat, the capo boasted that mobsters “were the only guys willing to go to war.”

In another tape, Big Anthony was getting itchy, telling a confidant he suspected “a rat real close to us.” He swore that when he found the snitch, he would “chop his head off.”

While on parole for a prior racketeering conviction, Anthony Russo was inducted as a made man and soon was promoted to capo. He’s now accused of murder, extortion and loan sharking, among other charges. He faces life in prison.

The relatively unscathed Genovese family, which had only 13 members charged in the bust, is now dominant, said a former law-enforcement official.

“They remain a very powerful group,” agreed Jack Garcia, a legendary FBI undercover agent who posed as moneyman Jack Falcone to infiltrate the Gambino family for three years beginning in 2002. The Gambinos have dropped to No. 2, he said.

“In the Genovese family, you really don’t have that many defectors. They’re still very entrenched in the unions and construction industry,” Garcia said.

The snitches and turncoats who aided investigators underscore a dramatic transformation of the city’s mob from the old days, agents and informants say.

“There have never been so many informants as in the past 10 years, They talk big, but they can’t do the time,” said Joe Pistone, an undercover FBI agent who penetrated the Bonanno crime family as jewel thief Donnie Brasco in 1976.

“With the young guys today, it’s the ‘me generation,’ ” Pistone said. “They want to make their money now and this why so many have gone into the drug business.

“They don’t have the wherewithal to cultivate the politicians and judges. Most of these guys couldn’t point out Italy on a map,” Pistone said.

Former Gambino soldier Andrew DiDonato, who is now living “in Middle America” under a different name, said shaking down drug dealers was a steady source of income in the ’80s and ’90s.

He would approach dealers in Canarsie, Mill Basin and Bergen Beach, Brooklyn, and demand a regular kickback, telling them: “You got one of two choices: We kill you right here, or you pay us weekly.”

And the process of becoming a made man is now just a straight numbers game, decreasing the importance of honor and experience in favor of earning power.

According to Garcia, killing used to be mandatory before induction into La Cosa Nostra. “They felt you would never betray them, because you were dirty yourself,” he said.

Now all “they really want are guys who will make money for the family,” added Garcia, who was invited to be a made man in 2005 simply because he was a “big earner.”

Gotti held meetings each Wednesday with all his capos at the Ravenite Social Club in Little Italy, which helped investigators piece together their criminal enterprise.

“We realized that social clubs and gathering together brought unnecessary heat, and law-enforcement an opportunity to identify the players,” said DiDonato, who turned state’s witness in 1997 and blew the whistle on a double murder and other crimes.

DiDonato said more goodfellas are either becoming snitches or leaving the life entirely to avoid hefty prison sentences. Most fear being double-crossed — or killed — by their own mob families.

“The respect in the mob only goes up the ladder — it does not come back down,” he said.
Posted by joe levin at 8:57 PM