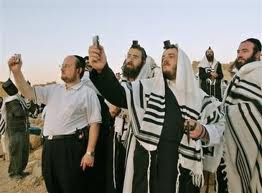 Rabbi Aharon Shteinman, head of the Lithuanian Orthodox yeshivot, has warned his students that he and his educational staff will not attend the wedding of any student caught with a cellular phone inside the yeshiva.

According to a haredi source, the new regulation was not adopted by all yeshivot. "The regulation isn't being applied by the two biggest ones – Ponevezh and Hebron – due to the parents' difficulty to locate their sons through a public phone, so in those yeshivot a cell phone is permissible."

The same source noted that the regulation is directed mainly at engaged yeshiva students, who are busy planning their weddings while using their cell phones freely on the premises, prompting their friends to do the same.

"The yeshiva heads cannot threaten to expel an engaged guy from the institute because he is undeterred by such threats at this stage of his life. Therefore, they have decided to threaten them with the sanction of ordering the yeshiva's spiritual staff not to attend the wedding."

The decision has already been implemented by the Orchot Torah Yeshiva, which has more than 500 students.
Posted by joe levin at 3:49 PM