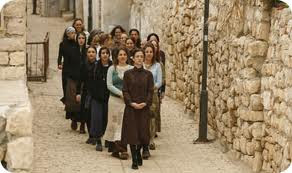 Haredi women have begun supervising businesses in the neighborhoods on behalf of the new department, checking whether the clothes sold in the stores meet the requirements of Jewish Law. The department's findings will be published across the neighborhoods.

According to an ad issued by the Committee for the Sanctity of the Camp, many of haredi women buy clothes which do not meet proper standards, "damaging our camp's modesty."

The ad also stated, "Experience shows that there is no other way to defeat this horrible breach other than having rabbis supervise the clothes' kashrut."

The committee added that haredi women must "support the kosher stores" by buying their clothes there.

A source in the Geula neighborhood told the Yedioth Jerusalem paper and the Mynet website that some clothing stores refused to meet the new department's demands. Other businesses, however, gave in to the new rules for fear of creating a dispute with the sector's leaders, which may lead to protests outside the shops.
Posted by joe levin at 5:20 AM