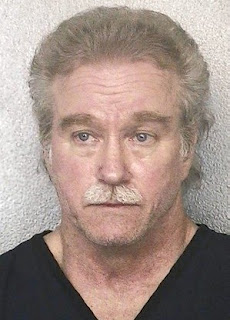 Developer Glenn Wright, whose firm was involved in the Cindi Hutchinson scandal that blew up Friday, was charged today with stealing $20,000 from the homeowners association of one of his upscale housing developments.

The last time I saw Kaplan, he was dancing ecstatically on a boat in the Winterfest Boat Parade. He's been accused of no wrongdoing other than having a penchant for becoming the spiritual leader of high-profile thieves and rapscallions.

"Kaplan stated Wright was generous with donations and arranged a monthly $1,000 payment to be made to Kaplan through one of Wright's subcontractors, Hector Heguaburo. In November 2006, Kaplan was in the process of purchasing a new building for the Downtown Jewish Center and did not have enough funds to close on the property. In the days leading up to the closing, Kaplan stated he called Glenn Wright and requested $20,000 for this purpose."

Wright agreed and plucked $20,000 from the La Preserve HOA over which he and his wife, Patricia, still presided, according to BSO. Kaplan said Wright told him to pick up the check from Wright's project manager, Steven Goldstrom, but he thought it might have been delivered directly to Rothstein Rosenfeld Adler law firm, which was handling the closing. The check was written to the RRA IOTA account.

Kaplan repaid the "loan" in March 2008 when Patricia Wright called him and said they needed the money back.

When questioned by Johnston, Wright said he had no recollection of writing the check, which had his signature. Patricia Wright said she learned that the $20,000 was "mistakenly" given to the rabbi and that she got it back when she learned of it. She told Johnson she thought Goldstrom had given the money over.

During the housing boom, Wright built hundreds of controversial McMansions that Fort Lauderdale residents complained were ruining old neighborhoods like Victoria Park and Rio Vista. When the bust hit, Wright's projects fell more than $100 million in debt, and the buyers of his homes fell into foreclosure en masse. He left many homes unfinished despite having received deposits from buyers and has been accused in court of stiffing his subcontractors. Wright has been hit with dozens of lawsuits to date.

Inside, a look at "La Preserve," which is the development from which is accused of stealing.

Here's why they were called McMansions:

Notice that each La Preserve house looks extremely similar, though there's an effort to switch it up in the design (different colored roofs, altered faces, etc). Wright developments like La Preserve and Georgian Oaks were self-contained subdivisions, so they weren't nearly as controversial as his earlier days when he stuffed the McMansions on lots in Rio Vista and Victoria Park after bulldozing the existing house.

Wright built 67 of them in La Preserve and was selling them for $700,000 to $1 million before the bust hit. Then the whole thing blew up. Not only did the people who bought homes in the development go upside down but so did Wright, who was sued for foreclosure by Wachovia Bank when he still owed $8 million. That led to bankruptcy and events like this one:

Today the houses are assessed in the 400s. Many have gone into foreclosure; many owners still retain their homes despite the fact that their values have in some cases been cut in half.

This, of course, is happening across South Florida. But Wright's projects, because they were in such sharp contrast to the older and more charming surrounding neighborhoods, were as controversial as any in the county. His McMansion business started inside Rio Vista and Victoria Park, where he would buy existing properties, tear them down, and cram the lot with one of his cookie-cutter masterpieces. Well, actually his modus operandi was often to replace the existing house with two McMansions. The result was an aesthetic disaster, clashing with the neighborhood's Spanish architecture and lush landscaping.

The guy was so controversial that at one time, Wright had some 14 lobbyists on his payroll.

Wright hired Jon Albee, an appointed member of city boards, to work for him. Albee ran for commission in 2003. losing to Dean Trantalis. The fact that he worked for Wright didn't help his campaign. When he filed his public financial disclosure forms, he conveniently left out his employment with Wright, calling it an "oversight."
Posted by joe levin at 7:00 PM