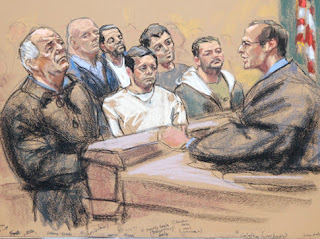 The massive mob takedown shows organized crime's grip on unions is virtually unbroken - even at Ground Zero - despite decades of prosecutions.

Scopo, who pleaded guilty to extortion in 2005, inherited leadership of concrete workers Local 6A from his father, who was convicted in 1986 in the Mafia Commission case. His brother, Joseph, was whacked in 1993. Reputed Colombo capo Anthony Russo was charged Thursday with the murder.

Prosecutors say Ralph Jr. gave jobs to cronies and scammed the union benefit funds. Through a so-called coffee boy scheme, he even skimmed money from lunch orders at every jobsite, the indictment charges.

Not all Local 6A members were happy about it.

In 2007 - after escaping jail for extortion by convincing a judge he had only two years to live - Scopo learned that a Ground Zero jobsite foreman was complaining about being under mob control.

He later told Calabro that Little Ralphie was there in case the reform-minded foreman "needed to be physically assaulted," the Laborers International Union of North America charged after taking over the corrupt local last December.

The younger Scopo now runs Local 6A. He has not been accused of any wrongdoing.

In 2008, they were indicted with Vincent Gotti and 61 other mob bosses and underlings on charges of ripping off the benefit funds of Teamsters Local 282 and Laborers Local 731.

Like Johnny Friendly, the fictional boss played by Lee J. Cobb in "On the Waterfront," the two shook down union members for annual Christmas payments, prosecutors said.
Posted by joe levin at 7:40 AM