Collector shells out $120k for grey Pontiac ambulance that carried the body of JFK (but is it actually a fake?)

Real... or fake? The ambulance said to have carried the body of assassinated President Kennedy has sold at auction for $120,000 (£76,000) to a female car collector 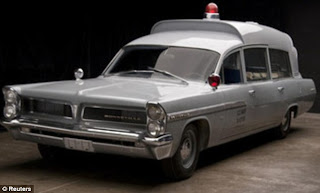 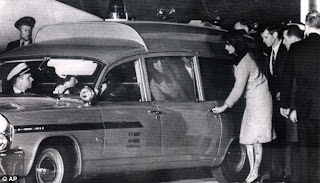 Car collector Addison Brown shelled out for the 1963 grey Pontiac Bonneville at an auction in Arizona - despite reports it was a fake.

The U.S. Navy ambulance was advertised as the vehicle that met Air Force One at Andrews Air Force Base and took Kennedy's flag-draped casket to Bethesda Naval Hospital.

It then transported his body to the Capitol to lie in state, it is claimed.

Auctioneers Barret-Jackson said they independently verified the authenticity of the vehicle.
But its status was called into question days before the auction in a report from automotive website Jalopnik.com, which claimed he real ambulance had been crushed in 1986.

However Mrs Brown - who, along with husband Walt is a huge car fan - dismissed the idea it was fake, and said she feels fortunate to own 'a piece of history'.

'[There is] absolutely no doubt in my mind,' she said after the sale.

'If they couldn't find a flaw, nobody will.'

She said she plans to keep the vehicle in her collection for now and will see if the Smithsonian Institution in Washington D.C. is interested in the ambulance.

'It belongs somewhere people can see it and experience it,' she said.

Iconic photos from that night show the newly-widowed first lady, Jackie Kennedy, looking dazed, her dress still stained with her husband's blood, holding the hand of her brother-in-law Robert F. Kennedy as they watched the casket being placed into an ambulance.

Another, posted on the auction website advertising the sale, shows Jackie reaching to open the rear passenger door of the ambulance, with Robert Kennedy just behind her.

The ambulance was put up for sale by John Jensen, a Kansas anesthesiologist, who bought it for an undisclosed price in 2009.

Estimates of the vehicle's value varied widely, with some projecting it would fetch over $1million (£634,000) at auction.

Mr Davis said he was relieved the car was sold and said controversy surrounding the sale would hopefully dissipate.

But like so many things about the tragic November 1963 day in Dallas, Mr Davis said the ambulance that crossed the auction block in Scottsdale will 'always be part of that shroud of mystery' connected to the Kennedy assassination.
Posted by joe levin at 5:23 PM