I was arrested for stealing my own car, says Bronx man who is suing NYPD 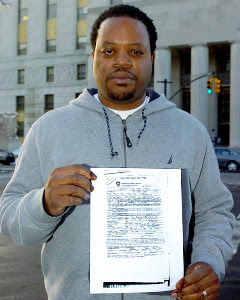 A Bronx man arrested in front of his kids for "stealing" his own car is suing the NYPD for $1 million.

Jamieson Prince, 43, says cops swarmed his 2007 GMC Yukon and cuffed him as he prepared to drive his daughters to school on Nov. 11 - even though he had papers proving ownership.

"I told them it was a mixup and proved to them I owned the car, but they wouldn't listen," Prince, a Norwood resident, told the Daily News.

"My little girls saw me arrested over nothing. It was so painful and humiliating."

Prince explained to the officers that his 23-year-old son had borrowed the SUV in July and fled from a crash in Harlem - leading to the son's arrest.

Cops say he hit a pedestrian and they seized the Yukon as part of that investigation.

When the elder Prince went to the 28th Precinct stationhouse to retrieve his SUV, police couldn't find it, according to court papers.

"They had absolutely no idea what happened to it," said Prince, an MTA track worker. "It had disappeared."

An NYPD spokesman confirmed Monday that the Yukon was stolen around 2 a.m. on July 7.

He drove off, thinking everything was okay, but cops rolled up to his home and arrested him a week later - accusing him of removing police property without permission.

"How can the NYPD just confiscate property, lose it, then arrest you for possessing it?" said Prince. "It's totally wrong. I want an apology."

Prince's lawyer Neil Wollerstein said a rogue police employee may have improperly used the SUV, leading to its disappearance.

"You can't lose a 5-ton truck," said Wollerstein. "Either they're completely incompetent or someone was up to no good."

The charges against Prince were dropped Jan. 12.

"I just want my daughters to know their father didn't break the law," he said.

"This turned my world upside down."
Posted by joe levin at 5:08 AM