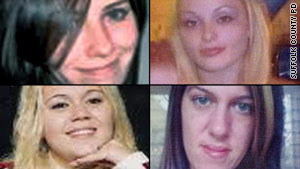 New York - All four women found dead in Long Island, New York, last month were prostitutes who advertised on the website Craigslist, and were probably slain by a serial killer, according to Suffolk County Police Commissioner Richard Dormer.

The bodies of Maureen Brainard-Barnes, 25, of Norwich, Connecticut; Melissa Barthelemy, 24, of Erie County, New York; and Amber Lynn Costello, 27, of North Babylon, New York, were discovered on an isolated strip of waterfront property in Gilgo beach, according to a Suffolk County police statement.

Authorities last week identified a fourth body found in the same area as that of 22-year-old Megan Waterman of Scarborough, Maine.

The bodies were discovered by accident when police were searching for a missing woman, Dormer said. Police are waiting for a break in the winter weather before resuming their search for Shannon Gilbert, who remains missing, he said.

The four bodies were in various stages of decomposition, and at least one could have been there for as long as two years, he said.

All were discovered on a quarter-mile stretch of land, "which indicates they were dumped there by the same person or persons," Dormer said. "It's too coincidental that there were four bodies in the same location."

A strange series of events preceded the discovery in December when a Long Island resident -- who lives a few miles from where the bodies were found -- said a young woman who "looked like she was partying all night" came to his door about 5 a.m. on May 1.

"She was screaming 'Help me, help me!' and said somebody was chasing her," said Gustav Coletti, who lives in the town of Oak Beach.

He described the woman as a "young, light-brown-haired person in her early 20s."

Coletti said he called 911 after opening his front door to the woman, prompting her to flee into the weeds along an embankment near his house.

Moments later, Coletti said, an Asian man driving a dark-colored sport utility vehicle pulled up alongside his home, looking for the woman.

"Things got out of hand at a party and I'm just looking for her," Coletti quoted the man as saying.

When Coletti told the man that he had called police, the man said he "should not have done that" and drove toward where girl had fled, Coletti said.

Authorities were searching the area when they found the first body, and three more were discovered the following week, Suffolk County police said.