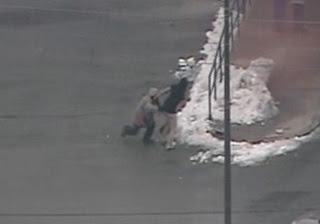 Bank Robber Takes Hostage, Slips and Falls on Ice, then Shot and Killed by Police: MyFoxDC.com

TAKOMA PARK, Md. - At least one civilian was injured by gunshot wounds Friday, along with a suspect and a police officer, after a woman was taken hostage during a bank robbery in Takoma Park, authorities said.

Video from the incident shows a man walking out of a Capitol One bank on University Boulevard toward police officers using a woman as a shield. As he was backing away from police, he tripped over a pile of snow from this week's snow storm. She ran away from the suspect toward police and held her hands up to cover her ears.

Bill Benjamin, who witnessed the incident from a nearby store, told WTTG-TV that he had walked outside to take out the trash. He said he heard three quick shots fired and saw police chase down the suspect.

"He looked like he was struggling to get away," Benjamin said. "Then they put him in the police car."

Herschel Ivy, who saw the incident from across the street, told WTTG-TV that he saw the suspect's hands go up when shots were fired. Ivy said he heard seven or eight gunshots fired as a woman who was held hostage ran toward police.

"She ran directly through the cordon of police officers," Ivy said. "You couldn't tell if they were firing from the left or from the right."

Several police and fire departments responded to the scene because Takoma Park is near the border between Montgomery and Prince George's counties in Maryland.
Posted by joe levin at 11:54 AM