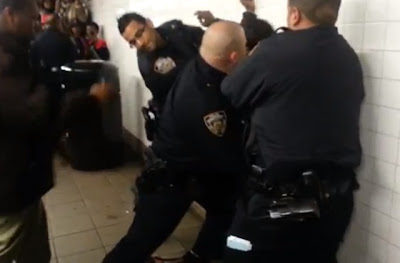 The attempted arrest of an allegedly hate-mongering teen aboard a Brooklyn subway quickly turned into a wild showdown between cops and a roiled mob, according to sources and video obtained by the Daily News.


The melee began when suspect Stephan Stowe, 17, and a group of eight friends approached a Jewish man wearing a yarmulke aboard a Brooklyn-bound 3 train just before 3 p.m. Monday, police sources said Wednesday.

"Assalamu Alaikum," Stowe said to the man, using a common greeting among Muslims that means, "Peace be with you," court documents allege.

When the man ignored the greeting, Stowe allegedly became combative.

"You think you're better than me?" the teen allegedly said. "We are cousins."


"No we’re not," The man shot back, and told Stowe to leave him alone.

The suspect then started hurling ethnic slurs and called the man disrespectful, according to court papers.

As the tension aboard the train escalated, the man whipped out his cell phone and took a photo of Stowe, who then snatched the phone and deleted the photo, police sources said.

But that's when a mob rose up against the cops.


A pair of police officers struggled to detain Stowe inside the empty train while the angry onlookers swarmed the station's platform snapping video and yelling at cops, video first published by Gothamist on Wednesday shows.

larmed by the swelling crowd, the cops called for backup, police sources said.

Amid the chaos -- and while Stowe appeared to resist arrest -- a woman aboard the train, Sheniqua Joseph, 22, got involved, according to police and the video.


After four minutes of alleged badgering of the officers, cops tried to place Joseph under arrest, video shows, and eventually slammed her against a wall while she went ballistic.

Joseph is accused of throwing a haymaker at one of the cops and kicking him in the stomach, court records allege.

She was arraigned on charges of obstructing governmental administration, resisting arrest and disorderly conduct.

Stowe was arraigned on eight charges, including grand larceny, which was charged as a hate crime, resisting arrest and harassment.

Stowe and Joseph could not be reached for comment Wednesday night. The victim of the alleged hate crime declined to comment.