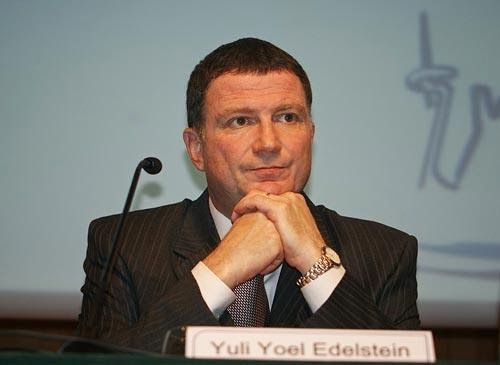 Tatiana (Tanya) Edelstein, the wife of Knesset Speaker Yuli Edelstein, passed away from a serious illness Thursday night at the age of 63.

Prime Minister Binyamin Netanyahu spoke with Edelstein on Friday morning to express his condolences, saying "I knew how much you loved her, and I know how much you will miss her. My heart is with you in this difficult hour."

Ms. Edelstein was an activist promoting aliyah (Jewish immigration to Israel) and teaching Hebrew in the Soviet Union, and afterwards in Israel, later working as an engineer at the Civil Aviation Authority.

Davidi Perl, Chair of the Gush Etzion Regional Council, spoke about Tatiana, remarking on how she struggled for Edelstein's release from the Soviet Union where he was held for being a Zionist 'refusenik.'

After Edelstein was released, "we merited being neighbors in Gush Etzion," said Perl. Expressing his condolences, Perl added "Yuli, dear friend, receive our condolences in your difficult hour...I wish you and all the family not to know any more pain, from me and all the residents of Gush Etzion."

The Edelsteins were married for 33 years.

The funeral will take place on Friday at 1 p.m. at the cemetery in Kfar Etzion, located in Judea between Jerusalem and Hevron. Transportation will be available for the public, leaving at 12 p.m. from the Knesset in Jerusalem.

Yuli Edelstein has warned in the past that Israeli concessions actually hurt the chances of peace, and criticized the 1993 Oslo Accords and the 2005 “Disengagement” as being mistakes stemming from a flawed understanding of the security situation in the region.
Posted by joe levin at 5:36 AM