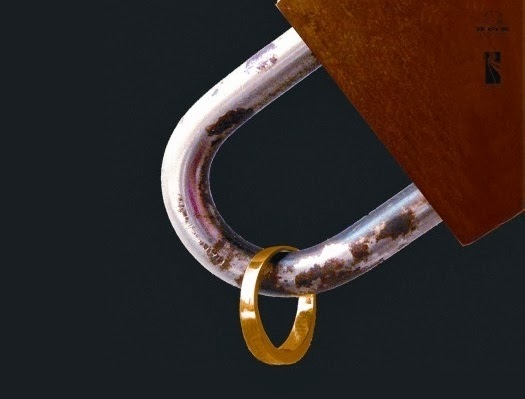 For some Jewish women the problem isn’t getting married, it’s relinquishing the bonds when things go sour.

That’s because an Orthodox Jewish divorce isn’t like any other.

To obtain a divorce in the Orthodox Jewish community, a wife must first secure a “get,” a letter dictated by the husband and written by a trained scribe that in essence gives his wife permission to sever the marriage and move on.

Without it, she is unable to remarry and any future offspring she might have is considered illegitimate. In other words, she is what is referred to as an “agunah,” a chained woman.

Increasingly, the agunah problem is getting the attention of Orthodox rabbis who are insisting that couples who plan to marry have a prenuptial agreement.

On Sunday, Bais Abraham Congregation in University City is holding a postnuptial signing party so that even couples who are already married can avoid the pitfalls of breaking free from a Jewish marriage.

The agreements stipulate that in the case of a divorce, the couple will go to rabbinical court, a tribunal made up of three rabbis, and abide by whatever the judge says. It also specifies that the wife must be paid $150 for every day she and her husband live apart but remain married.

Some Orthodox Jewish women struggling to persuade their husbands to grant them a divorce fear that if they try to carry on without one they face potential backlash from the community they yearn to be part of, as well as an uncertain future in the afterlife.

“In truly religious folk, they’re not only worried about how people are going to think about them… They’re worried about sinning.

Adultery is sinning, and the Bible itself says it carries the death penalty,” said Rabbi Hyim Shafner of Bais Abraham Congregation, who also plans to sign a postnuptial agreement on Sunday.

The issue of agunah most directly affects the Orthodox community, with its strict adherence to Jewish law.

But even some non-Orthodox Jews wrestle with the question of attaining a “get.” Those, for example, who plan to marry someone within Orthodox Judaism must ensure they are regarded as single.

Or a mother who hopes to raise her children within the Orthodox tradition might fret about others looking down on the children as illegitimate because she was still chained to her previous husband at the time she became pregnant.

The task of acquiring a “get” has proved so difficult in certain circumstances that some Orthodox Jewish women have resorted to violence.

A pair of Brooklyn rabbis, for example, recently gained notoriety after news reports circulated describing how they made a habit of charging women in need of a “get” $60,000 (including as much as $10,000 for a rabbinical decree permitting violence) to kidnap recalcitrant husbands and beat them into submission.

An FBI undercover agent posing as an Orthodox Jewish woman soliciting their services finally landed the men in jail.

A recent survey by The Mellman Group, a national polling research firm, found that between 2005 and 2010, there were more than 460 cases of “shackled” Jewish women in the United States and Canada.

Rabbi Jeremy Stern, executive director of the Organization for the Resolution of Agunot, a New York-based nonprofit that assists in resolving contested divorces, says that about 150 to 200 women a year come to them for help.

Since the organization’s founding in 2002, it has resolved 212 cases.

“We see the issue of refusing a Jewish divorce as a form of domestic abuse,” Stern said.

A recalcitrant husband may hold the desire for a “get” over the wife’s head, using it as a bargaining chip and demanding money or child custody in return for his permission to end the marriage.

That was the case for a St. Louis-area physician. She was only 25 when after dating for three years, she married a man who was also a doctor and with whom she later had three children. The marriage lasted more than a decade, but slowly, it had begun to dissolve.

“People change, and he became someone who was at first difficult to live with and then mean-spirited,” said the woman, who asked to remain anonymous in order to protect her children. “There was not physical abuse, but there was just a progressive demeaning, hostile environment in the house.”

Although she was able to gain a civil divorce in 2002, it took four additional years to procure a religious divorce.

“And not allowing me to have a ‘get’ and be able to move on romantically with my life was a way of controlling me and causing me pain,” she said. “And the problem is it doesn’t just cause the wife pain, the children suffer.”

She now regrets not signing a prenuptial agreement with her husband, especially because the method has proven to be effective by most accounts.

In 2012, Eben Light challenged his wife, Rachel Light, in Superior Court of Connecticut, arguing that the prenuptial agreement he signed, in which he promised to pay his wife $100 a day while the couple was separated but remained married, did not hold water in the secular courts. The court, however, ruled that the contract the couple had signed was indeed binding.

Michael Helfand is associate director of the Diane and Guilford Glazer Institute for Jewish Studies at Pepperdine University School of Law in Malibu, Calif., where he specializes in arbitration and constitutional law.

He said courts have traditionally ruled that contracts involving a religious dispute stand up in court. It’s an effective way, he says, to get two legal systems — religious and secular — to work together so there’s enforcement power.

Some caution that nuptial agreements function only as Band-Aids.

“It’s better than nothing,” says Susan Aranoff, co-director of Agunah International, a nonprofit based in Brooklyn that helps women win a “get” from their husbands. “It’s a good idea for people to sign it … but the community shouldn’t be misled into thinking that that solves the problem.”

Aranoff and Estelle Freilich, also a director at Agunah International, say that “what is needed is a systemic ‘halaka’ (Jewish law and rituals) solution.”

They argue that according to Jewish law, a wife can be freed from a marriage if she becomes aware of a previously unknown defect in the character of her husband.

The problem, they say, is that it’s unclear what kind of circumstances merit an annulment of this kind. But they insist that a husband refusing a divorce deserves this kind of action.

“I don’t think the rabbis really, quote, ‘get it,’ ” Aranoff said. “You need the woman’s perspective here. Nobody should be able to hold anyone hostage.”

“It’s a political problem,” Freilich added. “These rabbis are afraid of being branded that they’re not religious enough.”

Shafner, of Bais Abraham, says rabbis were not so reluctant to help women in this predicament in the past. In times of war, for example, when husbands went missing but had not been confirmed dead, rabbis “would go to the ends of the earth to free these women,” he said.

“It’s so ironic because it’s 180 degrees today. We’re so afraid that we’re not really willing to really stretch the boundaries of ‘halaka,’ Jewish law, to free her,” Shafner said.


By Lilly Fowler -Stltoday
Posted by joe levin at 6:34 PM