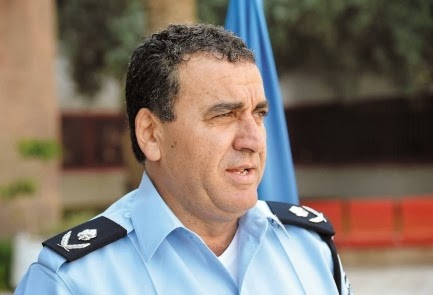 Attorney-General Yehuda Weinstein on Wednesday has ruled that a criminal investigation is warranted against Maj. Gen. Menashe Arbiv, head of Israel Police's Lahav 433 Major Crimes Unit, who has been implicated in a corruption case involving influential Rabbi Yoshiyahu Pinto.

Arbiv is suspected of having committed serious ethical violations while serving as the Israel Police attaché in the U.S. by allegedly accepting gifts from Pinto.

Pinto, who has agreed to testify against Arbiv and supply police with further evidence against the high-ranking officer, conditioned his cooperation with the state closing another case he has been implicated in, involving the alleged bribery of police Brig. Gen. Ephraim Bracha, head of the National Fraud Unit.

The police suspect that Pinto allegedly tried to bribe Bracha to get information about a third ongoing corruption case he has been implicated in, this time involving the siphoning of millions of dollars from a charity he headed.

Pinto, who is currently in New York, told his followers there that he intends to travel to Israel next week. Israel Hayom has learned that he will be deposed by the police during his visit.

"We're taking things one day at a time. The ball is in Pinto's court now," a police source familiar with the investigation said Wednesday.

"Maj. Gen. Arbiv would be happy of offer any clarification needed," an associate of Arbiv's said.

"He asked to be placed on leave of his own accord, to facilitate a thorough investigation in this case, one which would not allow Pinto to escape the potential charges against him. Maj. Gen. Arbiv is looking forward to offering his version of the events and refuting the bogus accusations against him."

Meanwhile, Republican Congressmen Michael Grimm, who has been implicated in a federal campaign finances case involving Pinto, threatened NY1 reporter Michael Scotto, who asked him about the case.

Grimm initially refused to answer the question, but when Scotto asserted that it was a valid question, Grimm said, "Let me be clear to you -- you ever do that to me again, I'll throw you off this f---ing balcony."

As the exchange, which was captured by NY1's cameras in full, continued, Grimm added, "I'll break you in half. Like a boy."

Grimm later apologized, saying, "I shouldn't have allowed my emotions to get the better of me and lose my cool." Scotto said during a television interview on NY1 that he had accepted Grimm's apology.