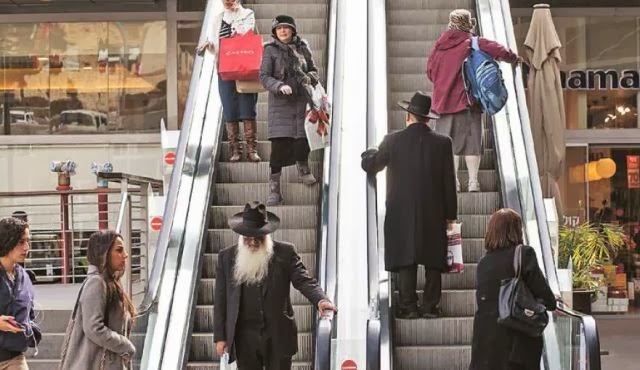 Israel's "religion and state" battles have taken on a new character in recent years. It's no longer the Orthodox rabbinate against the secular Supreme Court, or against the Reform and Conservative movements. Most of the battles of recent years are those of the Orthodox rabbinate against movements, organizations and phenomena that are themselves also Orthodox.

A run-down of some of these skirmishes provides ample evidence. The Orthodox Rabbi Avi Weiss was disqualified by Israel's Chief Rabbinate for the sin of granting ordination to female halakhic arbiters; the rabbinate was forced to reverse itself (not least as a result of the battle waged by the Orthodox Zionist Ne'emanei Torah Va'Avodah movement). Also Orthodox and in the firing lines: A significant percentage of the Women of the Wall, the religious girls who enlist in the Israel Defense Forces (now deemed by the Chief Rabbis as an improper vocation), Rabbi Haim Druckman's IDF-program conversion courts, the "community kashrut" project in Jerusalem which operates on trust rather than the Rabbinate certification process, and other movements and phenomena against which the rabbinate has declared war.

But another dynamic was revealed in these struggles. As opposed to the image that Orthodoxy in Israel is becoming more extreme, more Haredi and more isolated, there is a strong and opposite trend. A significant strengthening of the Orthodox voice that is committed to all of Israeli society and all of the Jewish people. Which is committed to halakha (Jewish religious law) but also to human ethics; which does not follow every social trend, but is also unwilling to categorically reject modernism and its values.

The Orthodox community in Israel was never homogeneous. The most prominent and well-known internal dispute regards Zionism: The Haredim (ultra-Orthodox) on the one hand, and religious Zionism on the other. This dispute is still alive and kicking, and it is in fact at the root of some of the battles, for example on the subject of conversion. It is clearly possible to argue that the more the dayan (religious court judge) feels himself responsible for "all of Israel" and sees a value in the integrity of the Jewish people and mutual responsibility, the more he will tend to emphasize the convert's desire to belong to the Jewish people, rather than how strictly the convert observes every marginal law on Shabbat. Such a dayan will seek to include rather than exclude.

The same is true of shmiTta, the sabbatical year that will begin next year, and the disputes and battles it will bring in its wake. The values-related question of the importance of Jewish agriculture in the Land of Israel, and what should be done to preserve its strength, certainly affects the halakhic policy regarding shmitTa. This assumption, that whether an arbiter or a dayan is "Zionist" has a decisive impact on his halakhic decision, and this is what lay behind the attempt by the religious Zionist Tzohar rabbis' organization to promote Rabbi David Stav to the position of chief rabbi.

But Zionism explains only some of the battles. Others, such as the increasing closeness between the Haredim and the Hardalim (Haredi religious Zionists), originates in another inter-Orthodox dispute, which is less discussed and far more complex. Namely the dispute, or in effect the series of disputes, regarding liberal values and modern culture in general. Values of equality, and particularly equality of women, liberty, the autonomy of the individual – are they all invalid or at least suspect, or can they be "converted" to Judaism, fully or partially, or at least examined?

Do these values arouse suspicion and should walls be built to keep out "assimilation" into them, or are they a revelation of God's will, a gradual redemption and improvement of the world? Does God speak to us only through the commandments and halakha, or through history and historical reality as well? And the modern world – is it entirely evil, full of temptations and dangers, or does it also represent a great blessing, and the chaff has to be separated from the wheat? What is the basic intuition – fear and seclusion, or integration? And tradition – is it a cosily static thing, beloved and cherished, which we must preserve, or is it living and changing all the time?

These disputes are less easily formulated and attract fewer headlines; they contain more shades of gray than of black and white, but they are alive and burning.

And when they are conducted "for the sake of heaven" and in a respectful manner they are also productive. Such disputes have always characterized the Jewish world, and indeed debates likes these built it. The problem is that most of the time these disputes are not conducted as disputes but as a battlefield where aggressiveness, force and delegitimization are all acceptable.

There really is a serious difference of opinion between the Haredi chief rabbis and Rabbi Avi Weiss on the question of what a women's place is in Jewish ritual and leadership. But instead of conducting an in-depth conversation and a proactive debate, the Chief Rabbinate chose to leverage its legal authority on the issue of recognizing someone's Judaism, in order to try to force its viewpoint about women on Rabbi Weiss. And the rabbinate is not alone. There have been repeated attempts to use various means to coerce or to "place beyond the fence" those with more liberal views.

But something is starting to change. Something in the public atmosphere within the religious Zionist community. The liberal voice, which for years was on the defensive and was almost totally silent, is once again being heard. And so religious feminism is expanding its influence, the attitude towards rabbis who have transgressed is no longer forgiving, and there is an open public discussion regarding it.

The ongoing process of creeping gender separation in the schools has been halted, the attitude towards gays (as individuals, not necessarily the orientation) in the Jewish community is also undergoing a change, and there is increasing opposition to current socio-political phenomena such as "price tag" attacks, racism (for example the "ban" on renting apartments to Arab Israelis), as well as to separatism in general, all informed by an embrace of a more humanistic ethos.

This voice is not new: It has always been here, but it had some very quiet, hesitant, perhaps even stuttering years, years of retreat and an apologetic attitude towards other, more unequivocal and one-dimensional voices within the religious Zionist community. But now it is once again louder. Expressing itself more articulately and more clearly as a spiritual and cultural option in the broad Israeli experience and in the narrow "sectoral" experience.

And for me it's a voice of hope. Hope for the State of Israel and for Judaism itself.

Tehila Friedman-Nachalon is a fellow in the Mandel Leadership Institute.
Posted by joe levin at 9:04 AM