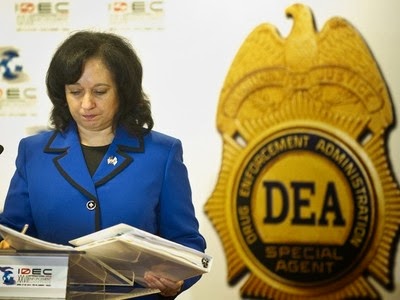 The nation’s drug enforcement czar disagrees with President Barack Obama about the dangers of smoking marijuana.

Leonhart expressed her frustration with the country’s increasingly relaxed attitude towards marijuana in the wake of President Obama recently telling the New Yorker he doesn’t think it’s dangerous.

She’s frustrated for the same reasons we are, Bristol County Sheriff Thomas M. Hodgson told the Boston Herald. “She said she felt the administration didn’t understand the science enough to make those statements.

‘She [also] said her lowest point in 33 years in the DEA was when she learned they’d flown a hemp flag over the Capitol on July 4,’ Hodgson continued. ‘The sheriffs were all shocked, this is the first time in 28 years I’ve ever heard anyone in her position be this candid.'

She was also infuriated that the White House played a softball game with a ‘pro-legalization group,’ Hodgson added.

Her pot shots at the president were not made in public, but they came after recent comments he made to the New Yorker raised more than a few eyebrows.

‘I view it as a bad habit and a vice, not very different from the cigarettes that I smoked as a young person up through a big chunk of my adult life,’ said the President.

‘I don’t think it is more dangerous than alcohol,’ he continued, adding that he believes it is even less damaging ‘in terms of its impact on the individual consumer.’

The flag was flown at the urging of Colorado Rep Jared Polis (D) and made of industrial hemp. It was not illegal.

The Obama Administration announced last summer it would no longer seek to stop states from legalizing recreational marijuana.

The President's evolving stance may just be a reflection of the country as a whole – almost 60 per cent of American’s are in favour of legalization, according to Gallup – but that doesn’t sit well with Leonhart.

‘This is a woman who has spent 33 years of her life fighting drug abuse in the DEA, her entire life,’ Kern County, Calif., Sheriff Donny Youngblood explained. ‘To have the president of the United States publicly say marijuana was a bad habit like alcohol was appalling to everyone in that room.

‘I think the way that she felt was that it was a betrayal of what she does for the American people in enforcing our drug laws. ... She got a standing ovation,’ he added.

Authorities have long contended marijuana is a gateway drug that leads to more serious addictions like cocaine, heroin and more, Hodgson explained. Having the President make those remarks sends children mixed signals.

‘The last person we need saying this to kids is the president of the United States.’

A source told the Herald Leonhart may lose her job over the comments, but a spokesperson made an attempt to clarify them in an email to the Huffington Post.

'With regards to the Herald story, I think its important to clarify that the Administrator's remarks were not at against the President, as the story portrays, but continued messages that the DEA is not in support of legalization -- and neither is the Administration.'