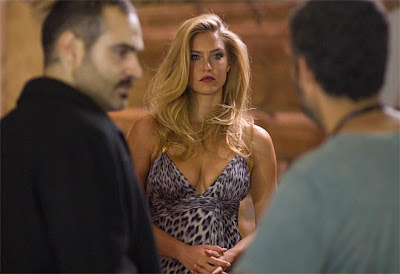 After a top Hamas commander was murdered in his luxury hotel room, Dubai police used surveillance camera footage to "solve" the crime and place the blame for the 2010 assassination on a multi-member Mossad hit squad.

Now an Israeli director has reimagined the real-life thriller as a spy movie, in which supermodel Bar Refaeli plays the Mossad agent tasked with luring the Palestinian militant into her web – but the actual hit is carried out by criminals who want to frame the Israeli spy agency for the murder.

The movie "Kidon" – "spear" in Hebrew – borrows the alleged name of Mossad's assassination squad. As in the January 2010 incident, the victim is Mahmoud al-Mabhouh, a Hamas commander who had allegedly helped capture and kill two Israeli soldiers in the 1980s and also smuggled weapons into Gaza. The Israeli beach resort of Eilat stands in for Dubai.

The rest of the movie, however, departs from the script. Because of the extensive use of surveillance cameras in the Gulf state, Dubai police were able to piece together the movements of an alleged hit squad in the hours leading up to Mabhouh's murder. A 26-person team that included two women, and adopted disguises that included wigs and tennis rackets, seemed to have entered Dubai using false European passports in the hours prior to Mabhouh's arrival, and left shortly after his death.


Based on their reconstruction of events, Dubai police believe the team followed Mabhouh to his hotel, where two men entered Mabhouh's room, injected him with muscle relaxant and then smothered him with a pillow.


Dubai authorities blamed Mossad for the hit, and the names on the passports, but not the faces, were traced to real people who had either been to Israel or were dual citizens. Israel has neither confirmed nor denied responsibility for the operation, but Israeli cabinet member Benjamin Ben Eliezer applauded the result, and said, "None of their people are untouchable, they can all be reached."

Israeli vendors soon began selling t-shirts and other merchandise boasting of the hit.

Though women were allegedly involved in the real operation, none of them played a role like that of Bar Refaeli in "Kidon." Refaeli's character, Einav Schwartz, sets a "honey trap" for Mabhouh, attracting his attention in a hotel bar and then leaving with him -- a moment caught, ironically, by the hotel's surveillance camera.


But Refaeli teased reporters on the set of the film, which will be released in France and Israel next year, by suggesting her part might be non-fiction.

"I would love to be in the Mossad and maybe I am," she said, according to the Associated Press. "Who knows? I think that being a famous model is the best cover."