U.S. to judge: Throw the book at blackmailing rabbi 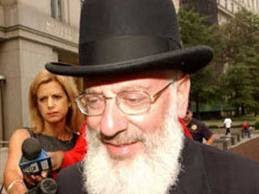 Balkany, 64, was found guilty in November of all four criminal counts of extortion, blackmail, making false statements and wire fraud after a seven-day trial in federal court in New York. His lawyer, Alan Kaufman, has asked U.S. District Judge Denise Cote in Manhattan to impose a ”lenient” term when he is sentenced Feb. 18. Kaufman didn't specify a term length.

The rabbi, who was also dean of the Bais Yaakov day school in the Borough Park neighborhood of Brooklyn, told the Connecticut-based hedge fund that he was the spiritual adviser to a federal prisoner in Otisville, New York, who could implicate the fund in wrongdoing, prosecutors said. He then called prosecutors in an attempt to put pressure upon SAC Capital to further his scheme, the U.S. said.

“The defendant sought to use the U.S. Attorney's Office to increase pressure on the hedge fund and make his threats more credible, all so that SAC would pay him the millions he was demanding,” Assistant U.S. Attorneys Marc Berger and Jesse Furman said in today court papers.

Prosecutors said sentencing guidelines call for as long as 108 months in prison and they urged the judge to sentence Balkany to a “substantially greater” term than the 24-month period recommended by U.S. probation officials.

Kaufman said in court papers that Balkany deserves a lesser term, citing his client's “lifetime of good deeds” and community service. The defense lawyer also said Balkany has 13 children, including a daughter who is handicapped, and that the family would suffer a hardship if he's incarcerated.

Witnesses testified at trial that Balkany told a lawyer for the hedge fund that the inmate would keep quiet about alleged illegal trading by the fund in 2004 and 2005 if SAC Capital paid his school and another school $2 million each.

The lawyer instead recorded his phone calls and meetings with Balkany.

Balkany was arrested last February after taking two checks from SAC totaling $3.25 million. Balkany told an SAC official at the time that the inmate wouldn't talk to federal authorities at a meeting scheduled the following day. No such meeting was actually planned, according to the government.
Posted by joe levin at 12:26 AM

Email ThisBlogThis!Share to TwitterShare to FacebookShare to Pinterest
Labels: InvestmentNews