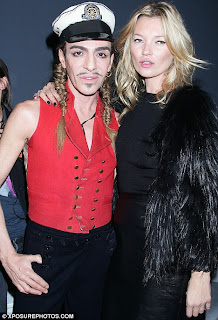 British fashion designer John Galliano allegedly grabbed a respected art historian’s hair and called her an ‘ugly, disgusting whore’ with a ‘dirty Jew face’ and no dress sense during an unprovoked attack in a Paris cafe.

Curator Geraldine Bloch, 35, has told officers investigating the alleged assault that the designer, who is close friends with celebrities including Madonna and Kylie Minogue, insulted every aspect of her looks, from her ‘ugly eyebrows’ to her ‘cheap thigh boots’.

During the incident, which has seen Mr Galliano arrested and suspended from his job as chief designer at Christian Dior, Ms Bloch claimed he even threatened to kill her boyfriend, receptionist Philippe Virgitti, 41.

She has claimed Galliano concluded his tirade with: ‘I am the designer John Galliano!’ while striking the trademark ‘rock star’ pose with which he often ends his couture shows
.
Details of the alleged incident emerged in French newspaper Le Figaro which claims to have seen police statements taken from the couple.

It came as Mr Galliano launched legal action against Ms Bloch, who is French, and Mr Virgitti, of Asian background, for defamation, after Dior made the decision to suspend him during the police investigation.

The alleged attack took place on Thursday night in La Perle, in the Marais district. There were ‘dozens’ of witnesses to the violence, which started soon after 9pm after Mr Galliano had reportedly drunk the alcoholic equivalent of two bottles of red wine.

It has been claimed Mr Galliano, 50, grabbed Ms Bloch, who is head of exhibitions at
Paris’s Institute of the Arab World, by her hair and shouted: ‘Dirty Jew face, you should be dead,’ adding ‘shut your mouth, dirty bitch, I can’t stand your dirty whore voice.’

According to police documents, he then turned his anger on Mr Virgitti, and screamed: ‘******* Asian bastard, I’ll kill you!’

Ms Bloch continued to scream frantically, but Galliano allegedly told her: ‘You’re so ugly I can’t bear looking at you. You’re wearing cheap boots, cheap thigh boots.
You’ve got no hair, your eyebrows are ugly, you’re ugly, you’re nothing but a whore.’

Mr Zerbib, Mr Galliano’s lawyer, denied his client had made racist comments, and confirmed he had launched libel proceedings against his accusers on Friday night.

But Dior chief executive Sidney Toledano said: ‘Dior affirms with the utmost conviction its policy of zero tolerance towards any anti-semitic or racist words or behaviour. Pending the results of the inquiry, Christian Dior has suspended John Galliano from his responsibilities.’

A Paris police spokesman confirmed all details of the allegations against Mr Galliano, and said he was facing criminal charges.
Posted by joe levin at 8:15 AM