Revealed: what CIA agent was really doing in Lahore as it emerges even Pakistan officials are 'worried for his safety' 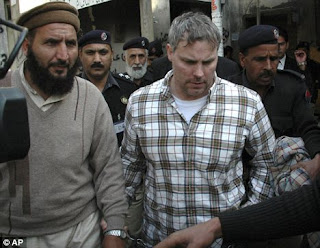 The CIA spy being held in Pakistan for murder was working as a security contractor and living in a Lahore safe house, according to former and current U.S. officials.

Raymond Davis, 36, was attached to the CIA's Global Response Staff, whose duties included protecting case officers when they met with sources.

He was familiarising himself with a sensitive area of Lahore on the day he shot dead two Pakistanis, it emerged.

Previously the U.S. had said Davis was a member of the 'technical and administrative staff' at the U.S. Embassy in Islamabad, who was entitled to full diplomatic immunity.

Despite the revelations they still maintain that Davis is a 'protective officer, someone who provides security to U.S. officials in Pakistan,' adding 'Rumours to the contrary are simply wrong.'

It also emerged tonight that Davis could be helpless to attacks from angry protesters despite increased levels of security at a prison in Lahore where he is being held.

A senior Pakistani intelligence official said the government had taken measures to ensure the safety of Davis, stepping up security at the prison, removing certain inmates and sending a contingent of well-trained paramilitaries known as the Rangers.

But there are serious doubts over his safety from both U.S. and Pakistani officials.
'We are very mindful of the difficulty that the government of Pakistan faces with public opinion in this case,' department spokesman P J Crowley said.

'We remain concerned about him and our message to Pakistan remains that he should be released as soon as possible.'

Davis, a former Special Forces soldier who left the military in 2003, shot two Pakistani men in what he described as an attempted armed robbery in the eastern city of Lahore last month.

A third Pakistani bystander, died when a car rushing to help Davis struck him. Davis was carrying a Glock handgun, a pocket telescope and papers with different identifications.

Davis has been detained ever since despite efforts from Senator John Kerry last week to strike a deal with Pakistan's Prime Minister Yousuf over his release.

His ongoing detention has sparked a diplomatic firestorm, with the U.S. seemingly willing to risk relations with its closest ally in the war on terror to get Davis back.

A number of U.S. media outlets knew the truth about Davis's employment but had suppressed the news at the request of the Obama administration.

New protests have now erupted in Pakistan after The Observer newspaper decided to publish details about Davis's relationship with the CIA yesterday.

It was revealed that Davis had previously worked for private security contractor Xe, formerly Blackwater, which has become a byword for covert American operations targeting the country's nuclear capability for many Pakistanis.

The news has given new life to conspiracy theories in Pakistan about armed American mercenaries roaming the country's streets at will.

Thousands have rallied to demand that Davis be hanged and the Taliban had threatened attacks against Pakistani officials involved in freeing the Virginia native.

The disagreement has already risked spinning out of control in recent days amid dangerous anti-American sentiment in Pakistan and U.S. threats of stronger Pakistan sanctions.

It also threatens the relationship between the two spy agencies, the CIA and Pakistan's Inter-Services Intelligence agency.

They had been told to do so because he had crossed a 'red line', the rumours claimed.

None of that has been confirmed.

However a senior ISI agent claimed the episode had damaged its relationship with the 'arrogant and demanding' CIA.

'We are a sovereign country and if they want to work with us, they need to develop a trusting relationship on the basis of equality,' he said.

The CIA has a major presence in Pakistan, where it runs the drone programme in Islamabad and offensive operations against militants, al-Qaida and Pakistan's spy agency, Inter-Services Intelligence
Posted by joe levin at 4:29 AM