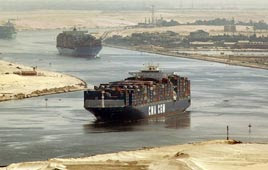 Two Iranian ships entered the Suez Canal on Tuesday and were heading towards the Mediterranean, a canal official said, a move certain to anger Israel.

Iran appears to be testing the state of affairs in the Middle East after the fall of Egyptian President Hosni Mubarak. A longstanding peace treaty with Egypt is crucial to Israel's regional security.

"They entered the canal at 5:45 am," the official told Reuters. No other details were immediately available.

Israel is anxious about political upheaval in Egypt and other Arab states aligned with its ally the United States.

Polls in Egypt suggest most of the main political forces will be less compliant with Israel and its ally the United States, though no group has called for the abrogation of the Israeli-Egyptian peace treaty.

Israel had said it takes a "grave view" of the passage of the ships - the first Iranian naval vessels to go through the canal since Iran's 1979 Islamic revolution.

"We can see what an unstable region we live in, an area in which Iran is trying to take advantage of the situation that has arisen and broaden its influence by transferring two warships via the Suez Canal," Prime Minister Benjamin Netanyahu said in public remarks to his cabinet last week.

"Israel takes a grave view of this Iranian step," he said, adding the Jewish state would need to boost defense spending as a result of Tehran's move and recent regional upheaval.

Egypt's ruling military council, facing its first diplomatic headache since taking power on Feb. 11, has approved the vessels' passage through the canal, a vital global trading route and major source of revenues for the Egyptian authorities.

The vessels include a frigate and a supply ship.

The decision was a difficult one for Egypt's interim government. Cairo is an ally of the United States, has a peace treaty with Israel, and its relations with Iran have been strained for more than three decades.

Analysts say the Iran see itself benefiting from the upheaval across the Middle East. Dislodgement and weakening of leaders sympathetic to the United States is likely to embolden Tehran, and the lessen the chances of it making concessions on its nuclear program. Iran denies it intends to build atomic weapons.

Last week, the prospect of the Suez crossing was described by Israel's far-right foreign minister, Avigdor Lieberman, as a provocation by Iran.
Posted by joe levin at 3:57 AM