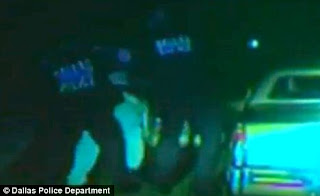 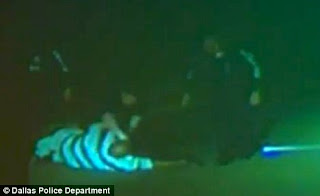 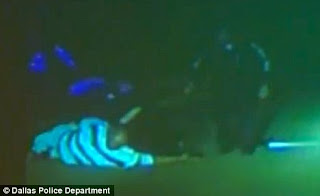 A rookie police officer accused of using excessive force on a handcuffed suspect has been sacked and faces criminal charges.

Former Dallas police officer, Quaitemes Williams, is alleged to have hit Rodarick D Lyles over the head with his torch and sprayed him with mace before kicking him in the head, during an arrest last month.

The entire incident was captured on a police dashboard camera.

Dallas Police Chief, David Brown, said at a press conference: 'The response can't be when the suspect is defenceless and handcuffed to kick a person in the head or even to mace a person.

'We have to be more professional and more disciplined than that.

'With this action today, we stand firm in our belief that the integrity of the DPD stands above the actions of a single officer or group or association.

'We also ask the public to view our actions as proof that we can and will police ourselves.'

They then discovered that Lyles's licence was also suspended and that he was wanted for driving without a licence in a previous incident.

Williams and Officer Edward Cruz-Done were called as backup. On trying to arrest Lyles the suspect resisted and a scuffle broke out.

Lyles, who Chief Brown said was a large man that weighed around 250lbs, fell on Williams who became angry.

Chief Brown said Williams then hit Lyles with his fist and a torch before Officer Cruz-Done took it away from him, feeling it was an unnecessary use of force.

Officer Solar then used a stun gun on Lyles who was handcuffed while on the ground.

The two officers then tried to calm Williams down. They described him as extremely angry and out of control, Chief Brown said.

However when they were distracted by more officers who turned up to assist, Williams allegedly sprayed mace into Lyles's face and kicked him in the face once.

Officer Rickey Upshaw, a 23-year veteran of the force who arrived as backup in time to witness the incident, reported it to his supervisors, Chief Brown said.

After he was sacked Williams was arrested and released on bail. He faces criminal charges of official oppression and if convicted he faces up to a year in prison.

Officer Soler is accused of entering inaccurate, false or improper information on a police report.

He was disciplined with a 10-day suspension. This is not the first 'dash-cam' incident to hit Dallas Police.

And two years ago an officer detained NFL player Randy Moss in a hospital car park while his mother-in-law was dying. The officer later resigned.

An accident investigator will not be punished after hitting a disabled woman on her scooter.

Ms Guyton was in hospital for around six weeks with injuries to her back, neck, arm and leg after incident last July, her lawyers said.

She is still recuperating, they added.

At the time Palm Beach County traffic investigators said Hester, then 44, had failed to give way to Ms Guyton, but was not given a ticket.

A review board ruled last September that any case against Hester was unsubstantiated, a Sheriff's Office spokesman told the Orlando Sentinel.

Ms Guyton's lawyers now intend to sue, according to the paper.

'There is no question that the driver of the Sheriff's (Office) vehicle was at fault,' Lorenzo Williams, one of Ms Guyton's lawyers, said.

'The law enforcement agency should step to the plate and do what is fair and just to this family.'
Posted by joe levin at 2:05 PM