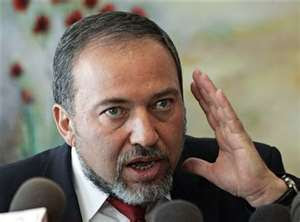 Foreign Minster Avigdor Lieberman was challenged by a reporter during his visit to the European Council, when the man told Lieberman that he was under citizens’ arrest and demanded that Lieberman accompany him to the nearest police station.

David Cronin, a freelance reporter and author of the book “Europe’s Alliance with Israel: Aiding the Occupation” was tackled by security officials only seconds after he began to address Lieberman and physically escorted from the room.

As Lieberman entered a press conference, Cronin stood up and declared, “Mr. Lieberman, this is a citizens’ arrest. You are charged with the crime of apartheid. Please come with me to the nearest police station.” As he was dragged away, he shouted, “Free Palestine! Free Palestine! Apartheid is a crime!”

This was not the first time that Cronin has tried to carry out a citizens’ arrest of a high-ranked public official. Last year he tried to single-handedly arrest former British Prime Minister Tony Blair for what he said were crimes against the people of Iraq.