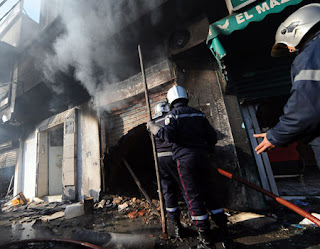 Ministry of Religious Affairs expresses regret over verbal attacks on Jews by Muslims outside Tunis synagogue, denounces any act likely to undermine respect for different faiths

Tunisia's transitional government on Thursday condemned verbal attacks on Jews by Muslims outside the Tunis synagogue last week and called on religious and civic leaders to denounce such actions.

In a statement released by the official TAP news agency, the Ministry of Religious Affairs denounced any act likely to undermine respect for different faiths and expressed regret that the incident had taken place.

The ministry stressed that Tunisia had always been a meeting place for different civilizations, religions and cultures. "In line with our ideals and the spirit of our grand people's revolution, we can only be more devoted to the traditions of freedom of religious expression, as much in beliefs as in the practice of the faith," the statement said.

Last Friday, at the beginning of the Jewish Shabbat, a group of men shouted outside the synagogue, "Begone the Jews, the army of Mohammed is back!" Images of the scene were shown on the Internet.

The Jewish community in Tunisia – estimated at some 2,000 strong, of whom 1,500 live in Djerba, 500 kilometers (300 miles) south of Tunis – expressed its concern to the authorities after this incident at the synagogue in the capital.

The government condemned all extremist activity outside places of worship.

A leader of the Jewish community in Djerba, Rene Trabelsi, said that the trouble-makers came from the Muslim fundamentalist movement El-Tahrir (Freedom), "very silent under the regime of (toppled president Zine el Abidine) Ben Ali, but now out to cause chaos."

"The situation in the country calls for vigilance" because extremists "take advantage of a vacuum," said the president of the Jewish community in Tunisia, Roger Bismuth, who had talks on Saturday with Prime Minister Mohamed Ghannouchi.
Posted by joe levin at 4:35 PM