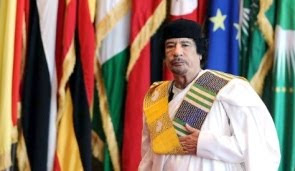 Gadhafi withdrew money and halted oil exports to Switzerland after relations soured in 2008; remains unclear if he still has assets there.

Switzerland said on Thursday it was freezing any assets Libyan leader Muammar Gadhafi and his family might have in the country.

"The Federal Council strongly condemns the use of violence of the Libyan leader against the people," the Swiss foreign ministry said in a statement. "Given the developments, the Federal Council has decided to freeze any possible assets of
Muammar Gadhafi."

A spokesman for the Swiss foreign ministry said it was not clear if Gadhafi and parties close to him do actually have assets in Switzerland. This will be announced in the next weeks.

Relations between Switzerland and Libya soured in 2008 when Geneva police arrested a son of Gaddafi on charges – later dropped – of abusing two domestic employees.

In recent years, Switzerland has worked hard to improve its image as a haven for ill-gotten assets.

It has also frozen assets that may belong to Hosni Mubarak, who stepped down as president of Egypt as well as those belonging to Tunisia's former president Zine al-Abidine Ben Ali, ousted by popular protests, and Ivory Coast's Laurent Gbagbo, who has refused to step down after an election which the outside world says he lost.
Posted by joe levin at 9:00 PM