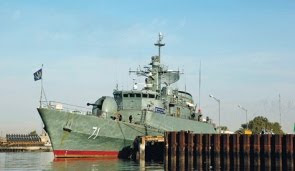 According to Egyptian authorities, Cairo refused to allow the Iranian vessels passage, but Iranian state television has insisted that permission was granted.

As of late last night it was still not clear whether Egypt would allow the two Iranian warships in the Red Sea and reportedly bound for Syria to transit through the Suez Canal and into the Mediterranean Sea.

Officials in Jerusalem are closely monitoring the movement of the two ships, which sailed from Iran two and a half weeks ago, and have been lobbying officials in the United States and other friendly states to use their influence to keep the vessels out of the canal.

According to Egyptian authorities, Cairo refused to allow the Iranian vessels passage, but Iranian state television has insisted that permission was granted and the ships will cross the canal into the Mediterranean.

“Iranian authorities were in touch with the authorities in Cairo in order to secure the passage for the ships,” the statement on Iran’s official television broadcast read, quoting an Iranian navy source.

The Associated Press, meanwhile, reported a senior canal official as saying the Iranian request had been withdrawn earlier yesterday, without giving an explanation for the application’s withdrawal. The official spoke on condition of anonymity because he was not authorized to brief the media.

Al-Manakhly noted that Iran and Egypt are not at war, and said the final decision on whether to grant the vessels’ passage lies with the Defense Ministry.

The Suez Canal official identified the two vessels as the Alvand, a frigate, and the Kharq, a supply ship, and said they were en route to Syria. He said they were now in an area near Saudi Arabia’s Red Sea port of Jiddah.