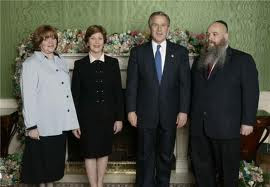 While the Chabad Shliach in Tuscon, AZ, was mum about the shooting in his home town, more recently Rabbi Yossie Shemtov had a lot to say about the fall of Hosni Mubarak in Egypt:

But how it will change, Shemtov said, he is optimistically hopeful. “We don't have to go back too much in history, but we are able to see within the context of just one century how a government fell and it became terrible, and a government fell and became good.”
Posted by joe levin at 11:55 PM