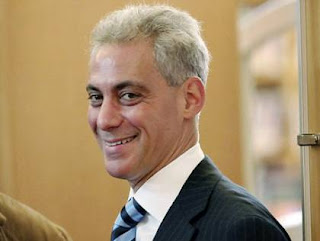 Most polls showed Emanuel leading the pack of Democrats vying for the top job in City Hall and he spent the day criss-crossing the Windy City in search for more votes.

Emanuel, who has been the clear front-runner since he resigned to run for mayor last fall, has to win more than 50% of the vote to avoid an April 5 runoff.

If he pulls it off, it will be the first time in 22 years that somebody other than Richard Daley is, as they say in Chicago, "da mayer."

Emanuel's former boss and fellow Chicagoan, President Obama, has not weighed in publicly on the mayoral race.

Voting appeared to be brisk in a city where the dead have been known to cast ballots and where election day hijinks are part of local lore.

Emanuel's five-month bid to become mayor had its share of unexpected twists and turns.

A 51-year-old former congressman, Emanuel's first attempt to return home was blocked by the tenant renting his northside house, who refused to leave.

Emanuel also had to prove he was a Chicagoan and thus entitled to run for mayor in a legal battle went all the way up to the Illinois Supreme Court.

He also had to fend off a challenge by the Rev. Jesse Jackson and other black leaders, who tried to get the city's massive African-American vote behind Braun.

Armed with name recognition and a $12 million war chest, pollsters said Emanuel appeared to have shaved off at least half the black vote.

He also was believed to be running strong in Chicago's other big voting blocks - the Poles and Hispanics.
Posted by joe levin at 4:05 AM