Greedy life-insurance agents took out huge policies on penniless seniors, and then asked them to fake illnesses so they'd seem more likely to die, as part of a $500 million scam, investigators said yesterday.

The fraudsters sought to cheat not only the insurance companies, from whom they reaped huge commissions, but also investors looking to buy the policies on the secondary market, postal inspectors said in mail-fraud charges filed against eight defendants in Brooklyn federal court.

Chaim Mayer Lebovits, of Liberty Planning, in Monsey, NY, facilitated the purchase of policies on behalf of the elderly "straw buyers," according to the complaint.

He and seven other defendants were released on bail yesterday. 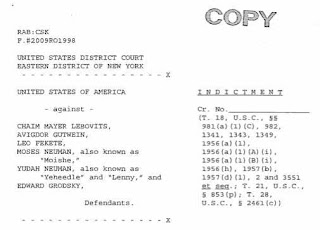