Past in Crown Heights Is Baltimore’s Present

A police car overturned by rioters in Brooklyn’s Crown Heights neighborhood on Aug. 21, 1991. 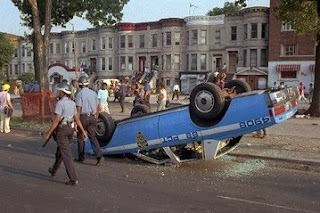 Developers are courting a new class of upscale condo buyers in Crown Heights, as gentrification marches east from what has been traditionally known as “Brownstone Brooklyn,” as The Journal reported Friday.

Swanky new construction and a middle-class influx are significant changes for Crown Heights, a neighborhood that has suffered from problems with crime, unemployment and disinvestment in past decades. An important factor: many older residents still hear echoes of the three days in August 1991 that ripped the social fabric in a neighborhood still shared by Jewish and Afro-Caribbean populations.

It has been nearly two decades since the Crown Heights riots, a three-day burst of violence that pitted the neighborhood’s black community against its Orthodox Jewish community. The violence, triggered by the accidental death at the hands of a Jewish driver of a seven-year-old black boy named Gavin Cato, resulted in widespread property destruction and led to the murder of a young Jewish man visiting from Australia. Fallout from the incident helped to swing the 1993 mayoral election in favor of Rudy Giuliani over incumbent Mayor David Dinkins.

Today, eerily similar tensions are brewing in another community with large Jewish and black populations living in close proximity. Only this time, it’s a few hours down I-95 in Baltimore.

On Wednesday, as the Baltimore Sun reported, Avi and Eliyahu Werdesheim, 20 and 23, pleaded not guilty to assault charges related to an incident in which the two men, who were members of a citizens’ patrol group called Shomrim, allegedly beat a 15-year-old black man as he walked through the neighborhood after dark.

The Baltimore neighborhood in which the attack took place, known as Park Heights, could use some help with emergency services. The local precinct recorded 30 homicides in 2010, and the area is plagued by abandoned houses and joblessness.

Outside the courthouse, however, protesters held signs that read “Prosecute Shomrim.” One a protestor told a videographer, “If it was my child they would’ve got time. So I don’t see what the difference is because they are Jews.”

Orthodox Jewish communities across the country often form groups to supplement city emergency and anti-crime services, sometimes equipped with cruisers, radios and uniforms (although usually unarmed). These groups often have close ties with the local police precinct and work in cooperation with city cops.

Crown Heights has its own Shomrim group, as well as an emergency-medical service called Hatzalah.

Hatzalah played a key role in the Crown Heights riots of 1991. According to published accounts, after a driver in the motorcade of a Hasidic rabbi veered onto the sidewalk and hit young Gavin Cato, a Hatzalah ambulance arrived on the scene and tended to the driver of the car and two other Jewish men while the child was pinned under the car and dying, leaving his care to a city EMS team.

The incident, and what some black Crown Heights residents viewed as indifference on the part of the Jewish driver and emergency crew, helped spark the riots. Soon after, Yankel Rosenbaum, a visiting Jewish student from Australia, was stabbed to death by Lemrick Nelson, a black teen, as a mob shouted, “Get the Jew!”

The Baltimore case has not escalated to the point of riots or violence, but the tension in the situation is palpable, according to media reports. There is also a relevant political subtext: In September, a former federal prosecutor named Gregg Bernstein, who is Jewish, unseated incumbent State’s Attorney Pat Jessamy, who is black, to take up the most important crime-fighting position in Baltimore’s judiciary.

A Crown Heights blog took notice of the parallels when, on Jan. 20, Bernstein dropped charges of felony assault against one of the Werdesheim brothers.

The scaling-back of the charges to misdemeanor status did not sit well with Baltimore’s black community. Protesters at the courthouse were quoted suggesting that Bernstein’s move was inappropriate, and that the community-policing organization has too close a relationship with the local police force.

The Baltimore incident has revived the debate over extrajudicial neighborhood patrols and service-providers in urban communities. It is striking how reminiscent the situation is to that of Crown Heights in the 1990s, and what those similarities says about exactly how far these communities have — or haven’t –- come.
Posted by joe levin at 1:25 AM