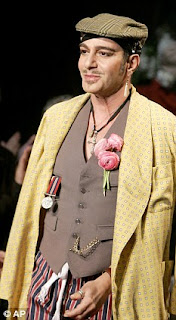 Fashion house Christian Dior has suspended British designer John Galliano after he was arrested in Paris on suspicion of assault and anti-Semitism.

The 50-year-old was held last night after he allegedly launched an attack on a couple sitting on a cafe terrace following a late-night drinking session in the upmarket Marais district.

Galliano, who has been Dior's creative director for 14 years, will temporarily relinquish his role 'pending an investigation by the police', the company said.

Police said the designer had drunk the equivalent of up to two bottles of wine when he was arrested, shortly after 9pm.

He was later released to return to his home in the same district.
It is not clear whether Galliano had been in the same bar as the couple before the alleged attack.

No charges have yet been brought against him.

A Paris police spokesman said: 'We don't know the precise nature of the incident but Mr Galliano was detained after a couple made a complaint last night.

'The level of alcohol in his blood was tested and he was then released.
'He had been drinking quite heavily.'

The Marais has historic associations with the Parisian Jewish community and has experienced a growing gay presence in more recent years.

The quarter boasts an array of luxury boutiques, art galleries and high-end restaurants which line its cobbled streets.

It is also home to a host of fashion houses and continues to draw tourists in droves.
A spokesman for Galliano refused to comment on the allegations or Dior's decision.

Witnesses called police during the incident, which took place in front of dozens of astonished revellers in a busy covered terrace.

A police source added: ‘We arrived extremely quickly and managed to break up the disturbance. The man involved was briefly arrested and then released pending charges for assault.

The source confirmed that Galliano, who has been chief designer at Christian Dior since 1996, was the only person arrested in connection with the incident.

‘Witnesses said he swore heavily, using anti-Jewish insults, before attacking a couple. Both have provided witness statements, as have a number of other people at the bar, including staff.’

However, an eyewitness who at the cafe at the time of the alleged assault told Vogue that Galliano may not have been at fault.

According to the article, which can be found here, the source said: 'We had a table at La Perle and John Galliano sat next to us.

'He spoke to a couple at a nearby table to say "Cheers" and they insulted him.

'An argument started and the police came, so Galliano's bodyguard suggested that they should go to the police station to sort it out.

'He wasn't "busted" aggressively by police, it was very quiet and peaceful. I definitely didn't hear him say anything anti-Semitic, or against any religion, it was all very calm.'

Galliano, who was born in Gibraltar and then brought up in South London, is often seen enjoying himself in the bars and café of the Marais.

He was supposed to be preparing the Dior autumn collection which will be shown for the first time at Paris Fashion Week, which starts on Monday.

Galliano, who regularly performs his trademark ‘rock star’ poses at the end of fashion shows, is one of the world’s foremost celebrity designers.

Close personal friends include pop star Kylie Minogue, for whom he has designed clothes for tours. Madonna has also visited him regularly in Paris.

His ‘set’ in the French capital has also included supermodels like Kate Moss, Helena Christensen and Naomi Campbell.

They are always so enthused by his creations that, it has been claimed, they regularly waive their usual couture appearance fees to appear in his clothes.
Private clients for his hugely expensive clothes included the late Princess Diana, who also loved his work.

A friend of the designer in Paris said: ‘Women love John because he has a very feminine side. Reports of this assault are so out of character. I’ve never seen him being violent towards anyone.’

Galliano produces work under his own label, as well as Dior’s. He produces six couture and ready-to-wear collections a year.

He has appeared on the Independent newspaper’s Pink List for being one of 'the most influential gay people in Britain’.

A Paris police spokesman confirmed that Galliano was facing criminal charges and would appear in court on a date to be fixed.