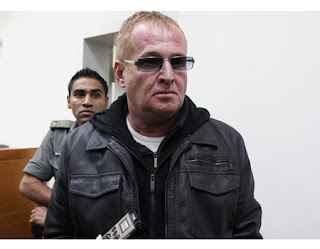 Police have arrested a man who allegedly disguised himself as a Shalit activist in order to steal hundreds of thousands in donations. On Monday, his arrest was remanded by nine days.

Ronen Bar-Shira was arrested Sunday night after an investigative report published by Yedioth Ahronoth. Police suspect that he accepted donations both for kidnapped soldier Gilad Shalit as well as for the Carmel fire victims.

The Rishon Letzion Magistrates' Court accepted the police's request for the remand of Bar Shira's arrest, attesting that "reasonable suspicion exists that the suspect has been involved in the violations with which he is charged".

Bar Shira is suspected of soliciting donations for the flotilla for Shalit, which never took place but for which none of the donors received a refund.

Police say he has repeatedly solicited funds for a number of different charity ventures, in the process taking advantage of people in distress, such as the Shalit family and the Carmel fire victims.

The investigators suspect he presented donors with false advertisement of each cause, later keeping all of the donated funds.
Posted by joe levin at 6:05 AM