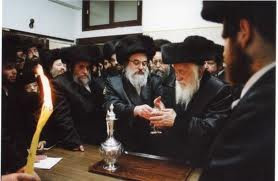 Vizhnitz Hasidism decides spectacles must meet modesty rules too. Yeshiva students urged to give up on metal glasses, contact lenses

Leaders of the Vizhnitz Hasidism have issued new instructions in regards to the purchase of eyeglasses, as part of their attempt to combat modernization.

In a special sermon to the young yeshiva students of the Hasidic dynasty, considered one of the biggest in the haredi sector, Rabbi Israel Hager, the successor of the Vizhnitz Hasidism's founder, discussed the dangers inherent in modernizations on the secular street and urged the students not to wear metal glasses and contact lenses.

The rabbi made the remarks as part of the Shovevim period - an acronym for the Jewish weekly Torah portions of "Shemot", "Va'era", "Bo", B'Shallach", "Yitro" and "Mishpatim". During this period, it is customary to be more careful not to violate any of the sex-related transgressions commanded in the Torah and study the laws relating to such transgressions.

Rabbi Hager said in his sermon that the students must "beware of the dangers hiding on the street." He added that, "a student who wishes to delve into Torah studies and observe mitzvot must detach himself from all nonsense and not let them infiltrate."

According to a Hasidism source, metrosexual men and students of the modern Lithuanian yeshivot were the only ones wearing contact lenses.

"This is the reason why the rabbi called on the students not to wear them. We are well aware of the statement made by the former Vizhnitz rebbe, who said we must wear the exact opposite of what is worn in Paris."

A Vizhnitz source explained that the essence of the Hasidim was to stay away from the nonsense and modernism of the world. "We are interested in keeping our distance from anything linked to party goers, recreational activities and clubs, and be on the other end in a way in which we won't even know that world exists," the source explained. "This is why our segregation is even applied to the type of eyeglasses."
Posted by joe levin at 6:12 AM