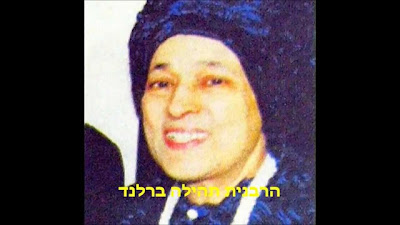 Tehilla Berland, suspected of theft from nonprofit organizations Shuvu Banim, was released to full house arrest and she was invited for further investigation on Sunday at 11 am.

Yesterday Tehilla Berland, wife of Rabbi Eliezer Berland community leader Shuvu Banim, who fled to Morocco, and mother and grandmother of Nathan and Nachman Berland who is currently residing under house arrest Beit Chelkiya, was summoned for questioning.

Berland was summoned for questioning in the morning, then brought to the Jerusalem Magistrate and the police agreed to release her under restrictive conditions.

Police representative testified that there is suspect of involvement in a large and complex fraud and theft of millions from Breslev donor's funds and Shuvu Banim.

The Rebbetzin appeared at 11:00 pm and the investigation continued until the evening at about 19:00. Because of her age and medical condition, she was fully released to house arrest on bail and third party, and was called again the next day.


During the hearing, Rebbetzin Berland behaved abnormally and blamed herself, and said that "I'm ready to go to jail instead of Nachman." The Rebbetzin was removed from the discussion. Only after the rules were clarified to her again, she was returned to the courtroom.

Her lawyer wondered: "Why on Sunday did the police released her under certain conditions, and the following day required more severe conditions? Since then she had a very long time to interfere with the investigation if she wants to disrupt." He added, "We cannot agree to a 30-day detention and deposit of a hundred thousand. We can agree to two guarantors and we cannot accept a deposit. We will agree to deposit her passport and agree not to make transactions in the accounts and funds."

Judge Dorit Feinstein concluded the meeting and said that the review of both investigations show that there exists a substantial disruption and that the Rebbetzin had a lot of information, and she also presents arguments that justify the alleged tampering. She added that from study of materials there is reasonable suspicion the Rebbetzin was involved in the offenses.

"Although time has passed since the investigation became public, the concern grew as she understood what the allegations are against her and her family was released," said the judge, and therefore ordered the release under restrictions as her son and grandson.

She was released to house arrest at her home on Hachoma Hashlishit, under the supervision of Chana Ovadia and Rivka Levy who will each sign a guarantee in the amount of NIS 5,000. She may not contact the Breslev Chassidim and implicated either directly or through a third party. Forbidden to leave country for 90 days, and deposit her passport. The Rebbetzin will give the court fund $ 100,000, and sign a personal bond in the amount of NIS 200,000.
Posted by joe levin at 9:16 AM