Rabbi Ovadia Yosef in serious condition, 'fighting for his life' 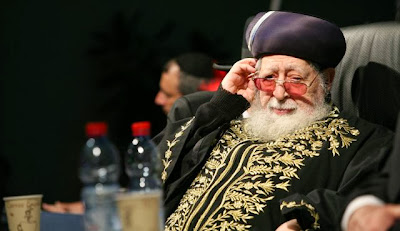 Yosef was hospitalized earlier this weekend, and has since been put on a respirator, had a pacemaker inserted and undergone dialysis. Followers of the rabbi said he was fighting for his life.

A hospital spokeswoman said: "Following an assessment of the situation carried out by Rabbi Ovadia Yosef's medical team, his condition has been pronounced serious but stable. The medical team has decided to increase medicine to treat blood pressure. The rabbi is still anesthetized and on a respirator, and is being kept in intensive care."

Several of the rabbi’s children are around his hospital bed, including his son, Sephardi Chief Rabbi Yitzhak Yosef, as well as Shas chairman Aryeh Deri. Deri called on everyone, secular and religious, to pray for Yosef’s health.

Prayer services for the rabbi’s heath are being held in many places in Israel and abroad. Late Monday afternoon, a central prayer rally was held at the Western Wall Plaza with the participation of Shas rabbis.

Some festive events of Sukkot week, including the Water-Drawing Festival, were canceled due to Yosef’s condition. A Haredi radio station has begun broadcasting continual updates on Yosef’s condition, interviews with rabbinic figures and recitation of Psalms.

Yosef has suffered recently from a series of health problems. After undergoing back surgery, he began to have problems with his heart and lungs, and was hospitalized several times in the last month.